According to Dutch newspaper, metronieuws, Louis Van Gaal’s ‘surprise’ striker for Manchester United is none other than his 25 million pound singing, Memphis Depay. 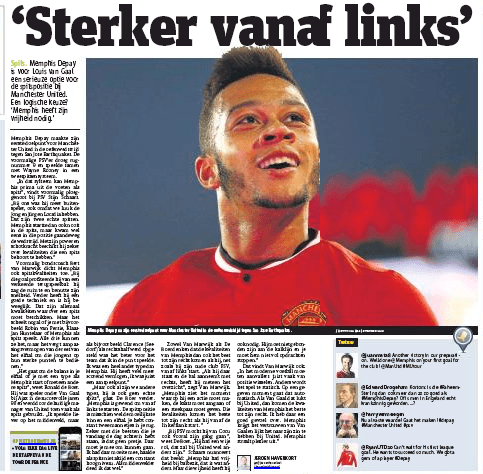 According to the Dutch newspaper, Depay could be the man to lead the line at Old Trafford and there will be no Manchester United transfer as far as a new striker is concerned.

The PSV man has always played on the left of a front three, cutting in with flair and pace. But Van Gaal is set to use his pace, power and technique to morph him into a versatile central striker for Manchester United.

According to Depay’ teammates and coaches Ronald De Boer and  Bert Van Marwijk, it is no surprise that Van Gaal wants Depay to operate centrally as the modern game requires a versatile forward like him.

“In modern football attackers must often change their position. Otherwise the game is too static.

“If Van Gaal to succeed at United, then he’ll use the qualities of Memphis to his best advantage. I have a good feeling about it. Memphis has Van Gaal’s trust and he seems to have a good time at United. Memphis exudes happiness.”

Depay would certainly be an interesting alternative to Wayne Rooney and could transform into a lethal forward with time if he can work on his composure and movement.