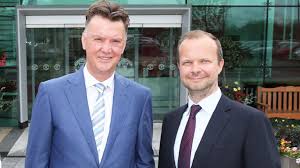 Manchester United manager Louis van Gaal has dropped a massive hint that Red Devils will make additions to the squad in the January transfer window.

The Old Trafford giants signed Memphis Depay, Matteo Darmian, Morgan Schneiderlin, Bastian Schweinsteiger, Sergio Romero and Anthony Martial in the summer transfer window. They failed to add one more striker, following the departure of Robin van Persie, Radamel Falcao and Javier Hernandez. They were also after the services of Real Madrid star Sergio Ramos to further add more steel to their back four.

Despite this, Van Gaal has seen United sit two points behind the league leaders Manchester City after 10 matches. They are fourth in the table with 20 points, level on points with third place West Ham United after a goalless draw against Manchester City.

The former Barcelona and Bayern Munich wants to add more pace to his side’s attack, which will help United become a force to reckon with

“I have already said, in the transfer period, I could not buy every player I want and that’s also because of the market,” Van Gaal told United’s official website.

“I have said that we need creative, speedy players in attack. You have seen which players I have bought; I like that profile, but we need more.”

Van Gaal further stressed the players he is looking to bring into the club are already interested in making a switch to United. However, it should be seen whether will it during the mid-season or in the next summer transfer window.

United manager’s comments will come as a boost, especially for their fans, who were hoping there could be further additions in the last summer transfer window. The club’s chief executive Ed Woodward had earlier revealed Red Devils will make more expensive signings in the future transfer windows.

“Was 2015 a peak? I think it’s impossible to answer that question. We have seen a large number of ins and outs in terms of the squad in the last couple of summer windows,” Woodward was quoted as saying by the Independent.

“We have previously guided on a more modest number in and out. It is a number-times-price calculation – the number can vary and obviously the price can vary quite materially based on who you are purchasing so it is difficult for us to guide on that.”