The Telegraph’s Mark Ogden, who named Football Journalist of the Year at the Northwest Football Awards in November, wrote couple of days back that Manchester United are interested in three players and one of them is Borussia Dortmund’s central midfielder Ilkay Gundogan.

The 23-year-old has established himself as one of the fine central midfielders in the world at the moment and certainly his transfer that would excite every Manchester United fans. At the moment he is injured and hasn’t played a game since August.

Gundogan’s contract situation is interesting as well. His contract runs till June 2015 while Dortmund are not willing to let him go on free, lest the club do not want to face a similar situation that is happening with Robert Lewandowski at the moment. 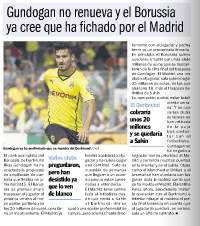 The player has expressed his desire to stay with Dortmund but if the contract talk doesn’t go smoothly he is open to move to foreign countries as well. If the reports of the German press are to be believed, then there is a possibility that Gundogan might leave the club in the summer.

According to Spanish newspaper, Sport, Gundogan has refused Borussia Dortmund’s latest renewal offer, with the club now looking to sell him and make a profit.

The problem is that the player reportedly already has a pre-contract with Real Madrid and doesn’t really want to move anywhere else – despite offers from the likes of Arsenal and Manchester United. Considering that he will only have a year left in his contract in the summer, Florentino Perez might very well get him at a reduced price – far below the €30m Dortmund want – like he did with Sahin a few years ago.