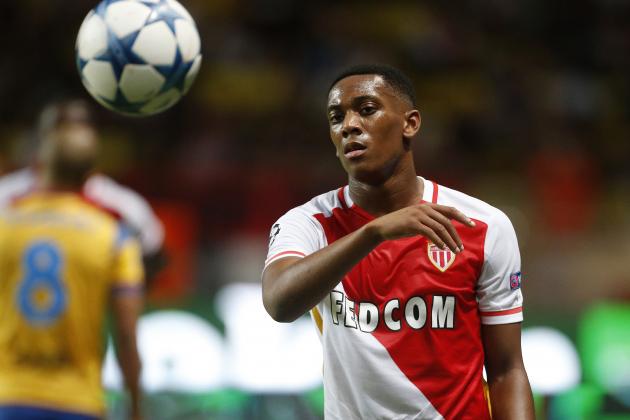 According to reports from French Media outlet RMC Sport, Manchester United have submitted a stunning €50m offer for Monaco striker Anthony Martial. The Red Devils who are in desperate need of a striker as the transfer window draws to a close are ready to gamble on the 19 year old French youngster.

Having allowed Radamel Falcao and Robin Van Persie leave in the summer, manager Louis Van Gaal is in search of striker who can lead the line up front and solve his goalscoring woes. Club captain Wayne Rooney has struggled in front of goal and he is the only striker United have in their squad. The Old Trafford side have reportedly also agreed to sell Javier Hernandez to German outfit Bayer Leverkusen.

Martial joined Monaco from Lyon just two years ago for a deal £3.6m two years ago and the teenager has scored 11 goals in 43 appearances for the nouveau riche French side. The teenager is also rated as one of the most exciting prospects in French football.

Get Football News France, another French media outlet claim that Monaco have rejected the offer. In fact they have also quoted Canal+ suggesting that United’s second offer worth €55m was also turned down. Despite this, they clearly state that it does not mean ‘United have given up pursuing the player‘.

The recent activity certainly shows that United’s desperation has reached new levels. Its surprising to see them panic in the transfer market that too with Van Gaal at the helm. The move for Martial certainly involves a huge gamble given that the player is relatively inexperienced and the huge price tag will carry sky high expectations.

Moreover, Martial is yet to play International Football regularly having just earned a call up to the national side by French coach Didier Deschamps.