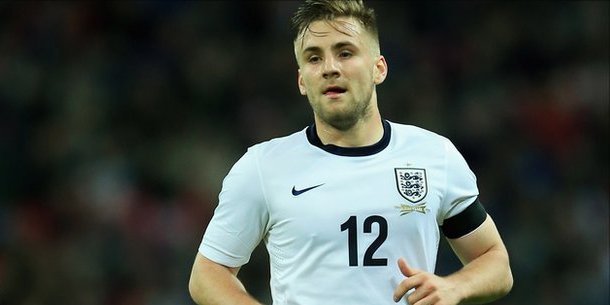 England have announced their 27 players long-squad for the Under-21European championship at Czech Republic this summer.

The Red Devils manager Louis van Gaal has already confirmed his desire in not letting his defender take part in the summer competition.

“When you are not playing for Man Utd you cannot play for other teams. He needs the rest. He is 19. We have to protect him. I hope that the coach of the Under-21s understands that,” Van Gaal explained.

The European championship starts on 17 June and ends the same month on 30 June. The former Barcelona and Bayern Munich manager has made it clear that Shaw will not take part in the competition as he has picked up several injuries throughout the season.

In fact, Shaw missed United’s 1-1 draw against Arsenal as he picked up an injury during 2-1 victory over Crystal Palace. However, not taking the former Southampton defender to the competition could be a serious blow for England.

The Young Lions’ attack includes the likes of Kane, Berahino and Ings, who have all impressed throughout the season with their performance at the club. However, missing out on Shaw could be a massive blow for Gareth Southgate’s side.

They have Middlesbrough’s Ben Gibson and Everton defender Luke Garbutt as the players in the left-back position. Gibson has featured in 38 league games and he is likely to start in the Euro Under-21 next month.

However, an injury to the 22-year-old could be a massive blow as the second choice Garbutt has played 10 games in all competitions. With lack of game time, he could struggle if Middlesbrough defender gets injured anytime during or before the start of the competition.

In addition to this, Shaw is the only player to have played with Roy Hodgson’s side during the 2014 World Cup. Despite the Three Lions being knocked out in the group stages, the experience of playing at the highest level could have helped Southgate and also England Under-21 side.

Shaw has been trained by Van Gaal, who has a very well know record of achieving success with both at club and national level. The left-back has learned a lot by playing under a manager like the Dutchman at Old Trafford and still has a lot to develop in order to reach at the top level.

However, the experience of training under United manager could also play a vital role in helping England Under-21’s during the upcoming European championship. He is good with when going forward and can supply to England’s fearsome attack in helping them score goals.

England can only hope that not including Shaw may not come to hurt them. His experience of playing at the top level when compared to other defenders, coupled with his playing style will be dearly missed by England under-21 and also their manager Southgate.