According to reports in Italian website Tuttosport, Manchester United have put an enticing €11m price tag on out of favor striker Javier Hernandez. The Mexican has fallen the pecking order at Old Trafford and it is believed that his career is well and truly over at the club. 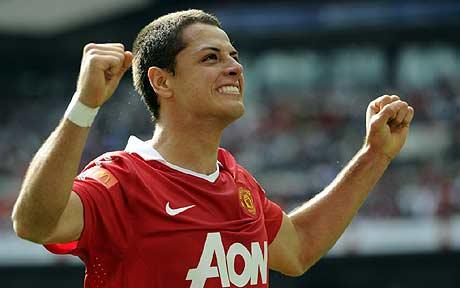 The report claims that Italian giants Juventus and Inter Milan are interested in the player and have expressed a desire to sign the 26 year old Red Devil.

Inter chief Erik Thohir had recently offer Fredy Guarin for Hernandez while Juventus had enquired on a possible loan deal with an option to buy. United have rejected both the proposals and have aid to both the clubs that they will have to pay straight cash for the player if they want to the negotiations to go ahead.

Earlier we had reported that La Liga winners Atletico Madrid are also interested in the striker who just featured in 29 appearances for the old Trafford side last season under the then manager David Moyes.

Louis Van Gaal’s recent comments on the player before United’s pre season tour in USA also hinted that the ‘Little Pea’ is almost heading towards the exit from the club. “I have to see if he performs how I want. Now I can only see what he has showed under the guidance of another coach. He will arrive this evening and I will meet him, we will train and after that he will perform in a match and then I can say something about that.”