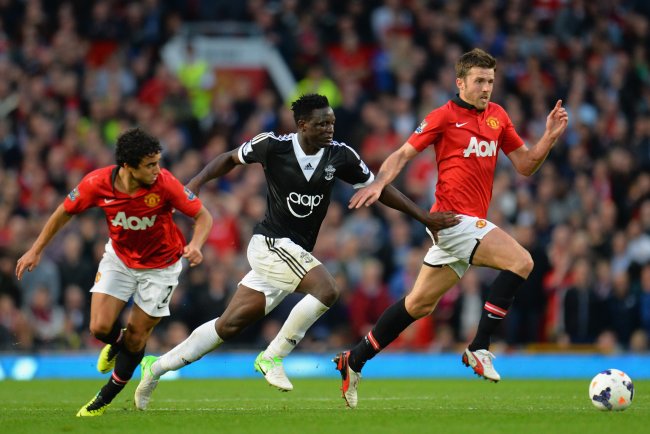 Manchester United were held at home by Southampton yesterday, drawing 1-1 in another blow for David Moyes and the Premier League champions.

Few would have begrudged the Saints a point from the game considering their performance, and a late equaliser was just rewards for their efforts over the course of the 90 minutes.

No other player typified the afore-mentioned effort better than Victor Wanyama. The Kenyan midfielder moved to St Mary’s over the summer in a £12 million deal, and is quickly looking to be well worth the investment.

Looking at Southampton’s miserly rearguard efforts this season, in which they have only conceded three times in eight games, a key reason must be the African enforcer.

Wanyama patrols the space in front of his back four with regimented vigour, and against United he made timely intercepts, broke up opposition attacks and closed down space.

The former Celtic charge was relentless in his work-rate at Old Trafford, harrying opponents and looked relatively composed on the ball, despite coughing up possession on a number of occasions in the second half.

On the contrary, Wanyama’s direct opposite number Marouane Fellaini continued his distinctly average start to life in Manchester. The Belgian still looks a yard off the pace; whether this is him adjusting to a new team, fitness issues or tactical problems remains to be seen – but Moyes needs to get to the bottom of it.

Fellaini, brought to United for his physicality, was beaten much too easily on countless occasions, with Southampton players rounding him at will and even outmuscling him in 50-50 situations.

In possession, Fellaini looked to play simple square balls or pass the ball backwards more often than he tried something enterprising, and seemed to not be able to cope with Southampton’s high-tempo, pressing tactics all over the park.

United, and other top English sides, were linked with a move for Wanyama during his impressive spell in Scotland and the club’s fans will wish that they had the Kenyan in their boiler room after his showing yesterday.

As it stands, they are left with Fellaini as a partner for Michael Carrick, and the former Everton man looks like he has a lot of work to do to get to a level where he can add to United’s quest of retaining their Premier League title.