Manchester United to secure €65m signing in the ‘next few hours’

Manchester United are inching closer to signing Real Madrid winger Angel di Maria, after the winger skipped his training and all set to fly to England.

Madrid friendly newspaper El Confidencial suggested this morning that Manchester United are on the brink of securing a €65m for the Argentine.

The deal is almost as good as done, with Manchester United are willing to give Di Maria the €8m/year salary he demands which his parent club Real Madrid weren’t willing to provide.

Di Maria had agreed a deal with PSG but FFP constraints stopped the deal from going through, so he will end up joining United, claim the paper.

Madrid based newspaper Marca has a short update on the story. With a headline starting ‘Adios’ they claim Angel di Maria will set to depart ‘en las próximas horas’, that means in the next few hours. 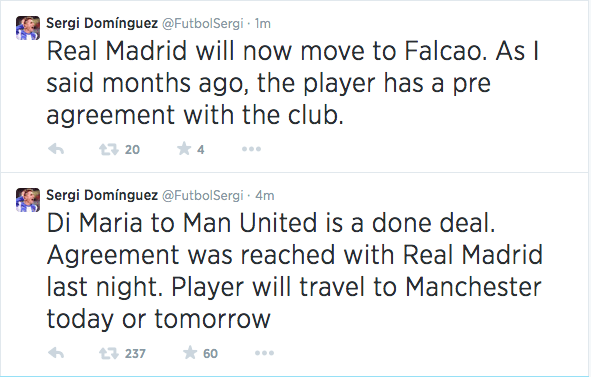 Respected journalist Balague claimed last night that Di Maria will be given the prestigious no 7 at Manchester United.

He will become the fourth major signing of the season and the club’s all time record signing player.