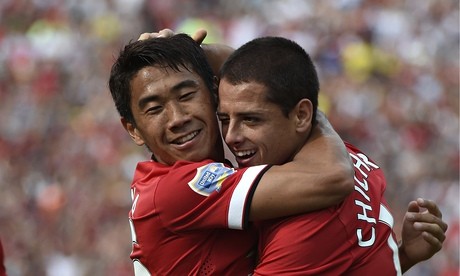 After a terrible start to the 2014-15 season, Manchester United manager Louis Van Gaal is looking to weed out the unwanted players from his squad. Several players have been mentioned whilst talking of an Old Trafford departure, but concrete reports from England and Spain today have short-listed two names for exits in the near future to La Liga club Valencia.

British newspaper The Times have reported that striker Javier Hernandez is being targeted by Valencia, who are willing to meet the £15 million price-tag assigned to the Mexican forward. Hernandez has been ostracised from the team since Van Gaal took over, and his seemingly indifferent performance in the recent Capital One Cup loss to MK Dons may be the final nail in his coffin.

Valencia are looking for a proven goalscorer to improve on their 8th placed finish in La Liga last season. They have failed to replace Roberto Soldado yet, who was sold to Premier League side Tottenham Hotspur last summer.

Serie A club Juventus are also interested in signing Hernandez, and there are reports that the Red Devils will use this move to get midfielder Arturo Vidal to United.

Valencia are also looking to prise attacking midfielder Shinji Kagawa away from United to the Mestalla, according to Spanish daily Superdeporte. The club were interested in signing Enzo Perez from Benfica, but had a €25 million bid turned down by the Portuguese giants. They have now set their eyes on Kagawa, who has not quite met the expectations at Old Trafford.

Signed by Sir Alex Ferguson from Borussia Dortmund in 2012, the Japanese was seen as a future star following two fantastic seasons in Germany. But in an injury-plagued couple of years, Kagawa has never been a regular first-teamer for United, and will be allowed to leave if the right offer arrives.