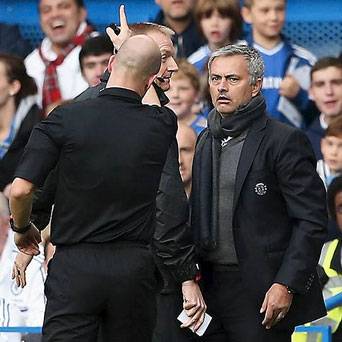 Former Manchester United midfielder Paul Scholes has stated in a piece in The Independent that Jose Mourinho’s attempts to influence the referees’ decisions may be backfiring, rather than helping Chelsea.

Mourinho has been in the news almost every week for the last few months now, with claims that there is a ‘campaign’ being run against his side. This is after a series of decisions which the Portuguese feels has been going against Chelsea in some crucial games, starting from Cesc Fabregas being denied a clear penalty away at Southampton on late December.

This week, in the game against Burnley on Saturday, referee Martin Atkinson made four very objectionable calls, all against Chelsea. In the end, this cost them two points, as they were reduced to ten men following Nemanja Matic’s red card.

But Scholes, who is one of the most successful players ever in the Premier League, with 11 titles to his name, feels that Mourinho is unable to replicate his own former manager Sir Alex Ferguson, when it comes to influencing referees.

According to the Englishman, the Chelsea boss feels that he is the biggest name remaining in the league after Sir Alex’s retirement. The Scotsman was known for influencing referees with the comments he made in his press conferences.

“There is no doubt that my former manager Sir Alex exerted an influence over some referees. He was the master of dropping a comment into his Friday press conference – for instance, how long it had been since we had been given a penalty, or the treatment meted out to a player like Cristiano Ronaldo. It was always calculated and delivered calmly”, Scholes wrote.

“How would I describe the impression I got from some referees when it came to Sir Alex? I think some of them wanted to please him. I don’t mean that they did us favours. It was more that they were very keen not to make mistakes in our games. That when they came to Old Trafford they wanted to be on top of their game and get everything right.” Scholes says that Mourinho is wrong to say there is a campaign against Chelsea, as there have been decisions going both for and against his side this season. He seems to applaud the referees and the FA for buckling under the pressure the Blues boss was putting them under through his comments.

“There is no campaign against Mourinho but there is clearly an unwillingness by referees, and the FA, to be pushed around.”

While Scholes may be right in stating that Mourinho’s comments aren’t having an effect on the referees’ performances, it would be wrong to say that the manager’s comments are totally unjustified.

For the last several weeks, Chelsea have been victims of some extremely poor calls by the officials. Had every decision been correct, the Blues could have been much farther ahead at the top of the table than the five-point lead that they have at the moment. They have only been awarded two penalties all season, as opposed to the seven that their closes rivals Manchester City have got. While that comparison alone may not be sufficient to judge the luck they have had with the referees, there are some particular instances that can be pin-pointed in this case.

On the first day of the season, Diego Costa was yellow-carded for allegedly diving in order to win a penalty away at Burnley. Replays show a clear foul by the goalkeeper, which should have meant a red card and a spot-kick. The Spanish striker has been denied on several occasions since, most recently last Saturday against Burnley, when he pushed by Jason Shackell (pictured below). The reputation he brought from La Liga of going down too easily has stuck, and penalties have been hard to come by as a result. Chelsea will hope that decisions going against them do not cause them to lose the title. They have been the best team in the league by a mile so far, but these faulty calls have meant on some occasions, their destiny has not been in their own hands.