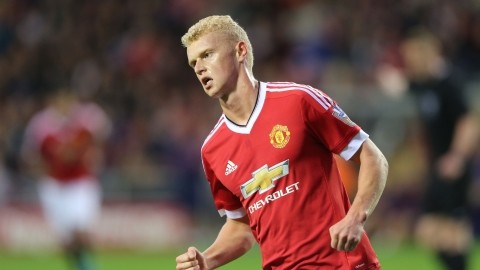 Manchester United U21 midfielder James Weir has admitted that he is looking forward to learn from Juan Mata in order to improve his game.

He joined the Red Devils in 2011 and plays as an attacking midfielder on the left side of the wings. The 20-year-old has been handed the armband by Warren Joyce before the start of the season and has been impressive so far.

Weir’s rise in form has already seen him train with Louis van Gaal’s side at the AON Training Complex. The Preston-born player believes his style of play is similar to that of the former Chelsea star.

“It’s similar [Mata’s game]. He cuts inside and gets goals and good assists. I’m hoping I can do the same. Juan is a quality player so I can watch him in games and even in training with them. You learn different things from observing what they do,” Weir told United’s official website.

The talented player started un U18s as a full-back, before slowly making progress and taking more attacking role. He has been deployed on the left wing this campaign, but can  play as a false winger and also as a central midfielder. Weir says his versatile style of play has seen him heap praise, but his primary focus is to improve his goal scoring stats.

“I’ve been mainly on the left this year but I can come in off the flank and play as a false winger, if you like, which is quite popular in the modern game,” he said.

“I can also still play as a central midfielder who can make runs forward and hopefully get back as well. I can play that narrow left-winger role and do a job for the team while also scoring some goals.”