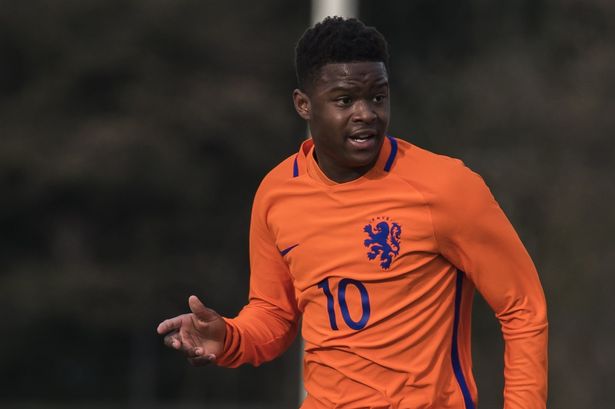 Manchester United are in pole position to sign Ajax striker, Daishawn Redan, in the summer.

The player has failed to reach an agreement over a new deal, and he is all set to leave the club this summer.

Redan, who turned 16 last month, has been monitored by United for over a year.

According to reports, United thought that they had missed out on signing him after the striker declared that he would sign a new contract at the Amsterdam ArenA. However, it seems that his future lies away from Ajax.

We have mapped out a path for him and held in-depth discussions with him and his management.

That there is no agreement is extremely regrettable; obviously they have something else on their minds.

We have made every effort to maintain a great talent as Daishawn for the club but at some point it stops. We wish him all the best with the rest of his career.

In recent weeks, talks have stalled with Redan demanding first-team guarantee for next season. Ajax are not willing to fulfil this wish so early.

According to reports from Manchester Evening News, Premier League giants Chelsea and Manchester City are also reportedly chasing the Ajax striker. However, the striker has admitted that he would be interested in joining the Red Devils.

I hear a lot of rumours around me and I will not deny that there are clubs that are interested.

Manchester United is a very nice and good club of course and I must admit that I am interested in an adventure like that.

Redan is a versatile young player who can play upfront or on the left. He has scored more than 40 goals in a season twice in his short career so far.

In December, Radan was invited to Manchester United’s Carrington training ground, and the player was first brought to attention during Louis van Gaal’s reign, by scout Henny De Regt.