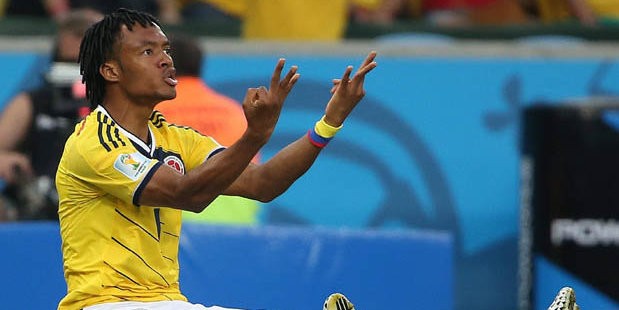 Its amazing what one good World Cup campaign can do for you! South American stars Alexis Sanchez and James Rodriguez have already moved to Arsenal and Real Madrid respectively for a combined fee of over £100m, Liverpool seem dead-set on Belgium’s Divock Origi, Dutch rock Ron Vlaar is attracting plenty of Premier League attention, and a host of keepers are now about to begin new club adventures after inspired performances in Brazil.

Colombia’s Juan Cuadrado also had a super World Cup campaign, and the 26-year-old is being strongly linked with a move away from Fiorentina to one of either Barcelona or Manchester United.

Ludicrously pacey and viciously direct, the £28m-rated Cuadrado was one of the standout performers for José Pékerman’s Colombia this summer, and according to Mundo Deportivo, new Barcelona manager Luis Enrique was very impressed with what he saw.

Cuadrado’s astonishing versatility is arguably his best asset, with the player having performed in nine different positions for club and country last season.

According to Mundo Deportivo, Louis van Gaal has named Cuadrado as one of his essential purchases this summer, with United eager to grant the 62-year-old his every wish in order to enable him to return the club to greatness next season.

With Nani and Ashley Young both perennial under-performers, and Antonio Valenica’s form having taken a turn for the worse recently, the acquisition of a new winger would seem to be high on the agenda at Old Trafford, and considering the abilities of Cuadrado, they would do well to prevent him from leaving Serie A for the Nou Camp, and bring him to the Premier League where he would undoubtedly shine.