Louis van Gaal’s reign as Manchester United manager got off to the worst possible start as the Red Devils were beaten 2-1 by Swansea at home in what was the 2014-15 Premier League season’s curtain raiser. United defensive frailities were certainly evident as they conceded a couple of goals in the most uncharacteristic of ways.

According to reports in Italian site Calcio Mercato, United have reportedly submitted a £30m(€38m) offer to Roma for acquiring the services of long term Chelsea target Mehdi Benatia, whose future at the Giallorossi remains uncertain. The reports have however cited reputed journalist Tancredi Palermi and claim that the Red Devils will have to wait until next week to find out if they can sign the 27 year old Moroccan.

We had earlier reported that Chelsea have ruled themselves out of the race to sign Benatia with manager Jose Mourinho claiming, “No. We are not interested. We have (John) Terry, (Gary) Cahill, (Branislav) Ivanovic and (Kurt) Zouma. We are fine.”

Benatia himself has told Roma fans at Roma’s summer training camp to “relax” and that he is “staying put.”

However, Reputed Sky Sports journalist Jim White however took to Twitter in the past hour claiming that Benatia is on his way to Old Trafford.

Moreover Ginalucas Di Marzio staff and Italian Serie A pundit David Amoyal who also believes that Benatia could leave Roma this season claimed that he will provide updates over the current situation surrounding the defender. 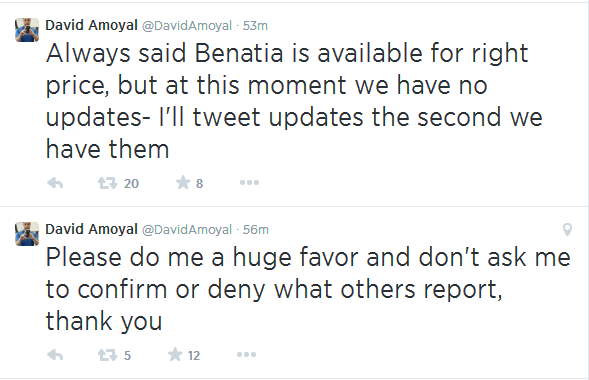 We shall be keep you updated on the developments.