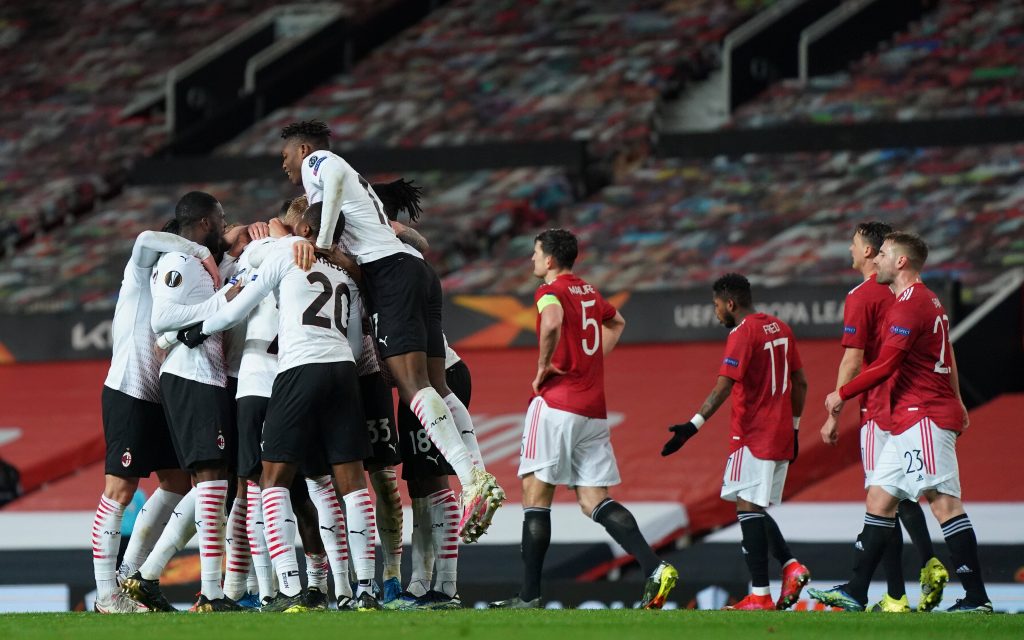 It was a tale of two headers as Manchester United conceded an injury-time equaliser in the first leg of their Europa League last 16 tie against AC Milan with the sides playing out a 1-1 draw at Old Trafford.

Simon Kjaer’s first goal for Milan late in the game cancelled out Amad Diallo’s 50th-minute opening goal for the hosts ahead of next week’s second leg at the San Siro.

United manager Ole Gunnar Solskjaer made four changes to his starting line-up from Sunday’s 2-0 win at rivals Manchester City in the Premier League.

Solskjaer’s side were also without goalkeeper David De Gea, who remains in Spain following the birth of his first child, so Dean Henderson continued in goal.

Meanwhile, Milan boss Stefano Pioli made just two adjustments to his starting line-up from the Italian’s win away at Hellas Verona last weekend.

Eventual goalscorer Simon Kjaer started at the back, and former Man City man Brahim Díaz came in for the visitors in an attacking role.

Defender Diogo Dalot was allowed to play despite being on loan at Milan from United as his parent club gave permission for him to do so. However, ex-United favourite Zlatan Ibrahimović missed out with a thigh injury.

The visitors started the game brightly and got on the front foot from the off as they had the ball in the back of the net within the first five minutes through Rafael Leão. The forward latched onto a long ball upfield but saw his goal ruled out for offside.

Anthony Martial then stung the palms of Milan goalkeeper Gianluigi Donnarumma in a rare moment of promise for United in the opening 45 minutes.

Before the quarter of an hour mark, the Italians thought they had the lead once again. Sloppy marking by United allowed Franck Kessié to pick the ball up from a throw-in and volley the ball into the top corner of the net.

There were no complaints from any of those in red, but a VAR review found that the ball had bounced up onto Kessié’s hand before the Milan man fired home, and a second goal in a matter of minutes was disallowed.

Although this was a huge let-off for the hosts, they didn’t liven up and were almost punished as Rade Krunić saw his shot saved by Henderson.

Five minutes before the break, Harry Maguire had the best chance of the half, and nobody could quite believe how he missed.

A corner from the right-hand side was flicked on by midfield maestro Bruno Fernandes, and the ball fell to Maguire to tap home from no more than two yards out. Maguire appeared to meet the ball with his shin, and it rebounded off the post and away from danger.

With the game somehow still goalless the teams headed in for half-time, and Anthony Martial limped off the field.

Solskjaer was forced into the first substitution of the evening, as he opted to replace Martial with January signing Amad Diallo.

Costing £37 million, the 18-year-old is yet to make a Premier League appearance for United and played only a small part against Real Sociedad in the last round of the Europa League, coming off the bench in both games against the Spaniards.

However, it took just five minutes for him to have an impact this time out. Fernandes floated a ball into the area from the middle of the pitch, and Diallo was there to head the ball back past an onrushing Donnarumma.

The innovative finish came against the run of play, with Milan dominating the first-half, but the home side now had a chance to take real control of not just the game but also the tie.

Solskjaer’s side didn’t do this and allowed the visitors back into the game. Henderson was called into action to save a shot from Kessié before Krunić missed a guilt-edge chance to level the game.

Davide Calabria took the ball on the right wing and whipped a cross to the back post. Krunić beat Aaron Wan-Bissaka and met it in the air, but he couldn’t direct his header goalwards, and it sailed over the bar. Calabria also saw a shot saved by Henderson in what was a good spell of pressure by Milan.

Then came a golden opportunity for United to put the game to bed, and simultaneously what turned out to be a missed chance which the hosts would kick themselves about, come the full-time whistle.

Greenwood beat his man on the edge of the area and fired a low ball across the box into the path of Daniel James with the goal seemingly at his mercy.

The Welshman did connect with the ball but saw his shot go wide of the post. James slumped to the floor with his head in his hands, and that was a sign of what was to come.

Substitutions ensued in the final quarter of the game, and Solskjaer tried to shut up shop by bringing on Brandon Williams, Luke Shaw and Fred.

Milan were on top and pressure was building on the United goal, but it looked as though the hosts were going to survive the onslaught to take a slender lead into the second leg.

We’ve become so used to United scoring late goals in Europe, manager Solskjaer a prime example of this given his previous goalscoring history for the Red Devils. But on this occasion, it was to be they who would pay the price.

In the second of three added minutes, Simon Kjaer met a corner taken by Krunić to secure a vital equaliser and an away goal.

This was Kjaer’s first-ever goal for the Italian outfit in 47 appearances. On reflection, ‘keeper Henderson will be disappointed that he didn’t save it, though his defence didn’t do him any favours given the poor marking from a set-piece.

So, now at the halfway mark in the Last 16 tie, it’s all to play for. The two sides will meet again in the second leg next Thursday at the iconic San Siro, which AC Milan share with their fierce rivals Inter Milan.