Reports from major Italian outlet La Gazzetta Dello Sport have run a story since yesterday that Premier League Champions Manchester City are ready to go all out in a duel against Real Madrid for the services of Colombian striker Radamel Falcao.

To add to the story, Spanish newspaper AS also provided a full page snippet citing the recent developments. 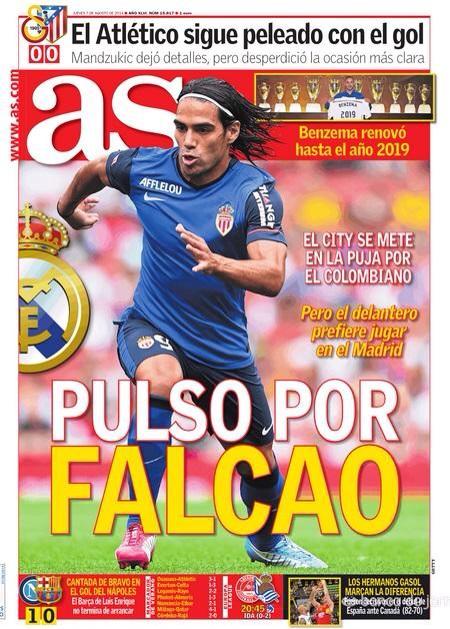 Falcao’s future at nouveau riche French side Monaco has come under speculations over the summer with reports earlier claiming ‘El Tigre’ was being targeted by the Champions League winners. However it is now believed that City want the player but only on loan as their summer transfer activity have been halted by UEFA’s Financial Fair Regulations.

Should the deal go through, Manuel Pellegrini’s side would be willing to let go Stevan Jovetic to Serie A champions Juventus. Falcao however as reported by AS, would prefer a move to the Spanish capital. The Spanish outlet has suggested that earlier this week Real supremo Florentino Pérez and Jorge Mendes were seen dining at the Bernabeu, and one of the subjects believed in the discussion was the possible arrival of Falcao.

However in an astonishing twist to the turn of events, Mina Rzouki, Football pundit at BBC, BT Sport, ESPN & Football Espana tweeted that Liverpool are in the lead to sign the Colombian.

It’s not yet done. Falcao is between Liverpool and City but the former quite a bit in the lead to land the player. What a coup it would be

The credibility of the tweet is yet to be verified as we have checked media outlets in France who are yet to report on the Reds’ interest in the player.