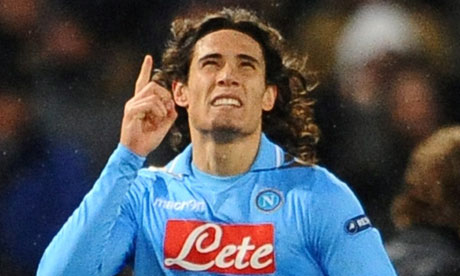 Manchester City are preparing to up their offer for Napoli striker Edinson Cavani to £40 million, according to The Telegraph. The Premier League champions face Chelsea today at the Etihad Stadium, but with arch-rivals Manchester United opening up a 15-point gap at the top of the table, City’s chances of retaining their crown are fading away. As such, the club are looking to strengthen and revamp their squad this summer.

It is believed that a central defender and centre forward are on the wishlist, with Cavani emerging as the side’s top target. City are also monitoring the transfer situation of Brazilian wonderkid Neymar, but it is believed that Barcelona are the frontrunners for the Santos man’s signature. Tabs are also being kept on Atletico Madrid’s Radamel Falcao, however Real Madrid and Chelsea are also keen to pry the Colombian away from the Vicente Calderon when the transfer window opens.

Roberto Mancini has also confessed his admiration for Cavani recently in The Guardian, and discounted a move for Neymar.

“But Cavani and Falcao would work in England. They have experience. Both players are 26, 27. They are good enough to play in England.”

As such, Cavani is the most likely addition to City’s squad in the summer. Napoli have revealed that they have already turned down a big offer for the Uruguayan from Roberto Mancini’s men; City are set to up their offer to £40 million.

Cavani signed a new five-year contact at the start of the season, but there are rumblings in the media that the South American has a £54 million release clause in the deal. Napoli president Aurelio de Laurentiis has recently stated to Sky Sports News that the player’s future will be determined in the summer.

“I have an extraordinary relationship with Cavani. He has a five-year contract with us and we will evaluate what to do in the summer. If he were to convince me that his story with Napoli is over we’ll talk, otherwise he will remain here.”

Much will depend on the managerial future of Mancini in regards to which players are signed in the off-season, but it seems that after missing out on Robin van Persie signature last summer City are in the market for marquee signing ahead of 2013-14.