What is wrong with Manchester and their away shirts? First Manchester United copying Chelsea’s away shirt and now this!

To celebrate the FA Cup win Umbro has taken Manchester City all the way to Italy where City will dress up as AC Milan for their away games.

At the City of Manchester Stadium on the Monday night’s FA Cup homecoming event, City players revealed what will be the 2011/2012 away shirt.

The club has revived the red and black look from the history books. It was worn in 1969 and 1970 when City won the FA Cup, League Cup and European Cup Winners Cup.

The shirt features vertical stripes but the sleeves have horizontal stripes so when the players celebrate away from home, their arms will be camouflaged.

To make the manufacturer logo and the sponsor logo standout against the black and red, they are key-lined in gold. 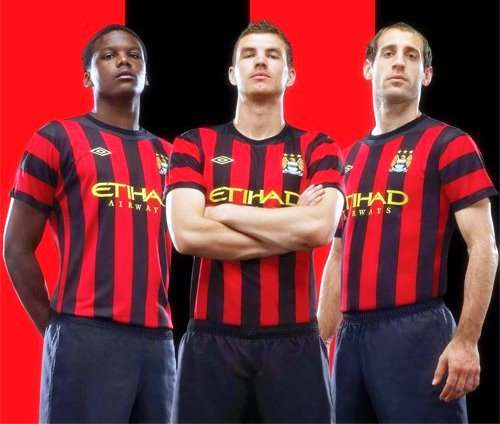