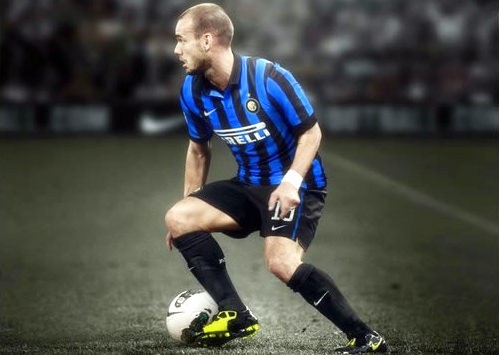 Inter Milan have revealed their 2011/12 home kits. The home shirt leaks suggested the correct design of the shirt but the revealed shirt has thinner stripes.

Inter’s five-year treblesome reign as the champions of Serie A came to end last season as their local rivals AC Milan took a six-point lead over them.

Rumors say that Wesley Sneijder’s departure to Manchester United is becoming imminent. If that is true, the Dutchman will leave a hole in the team which will not be easy to fill.

Lets take a look at the kits:

The traditional blue and black striped shirt will now have a black collar and black trim on the end of the sleeves. The stripes on the shirt are thinner than before.

The strip is made using a refined, modern design and fibres made from recycled materials to reduce the impact on the environment and it can also boost performance of the players.

“Charm, style and tradition. The new FC Internazionale collection and in particular the Nerazzurri home shirt are a tribute to the elegance and sartorial excellence that has made Milan famous throughout the world.

“Our constant commitment to technological innovation has allowed us to create an eco-friendly and extremely lightweight shirt which will weigh 13% less than previous shirts.”

Inter will wear black shorts with blue trim on the sides and black socks.

The away shirt for Internazionale for 2011/12 will be white with a black collar.

“The launch of the new kit designed for Inter by Nike has become a pleasant tradition.

“It’s a special occasion; it’s the start of a new season for all of us and particularly for the fans who love to wear the official shirt to show their allegiance to the Nerazzurri. Inter and Nike, Let’s hope for another winning partnership this time.”

For the first time, the Inter logo has been hot-pressed to make the shirts even lighter and allow the fabric to beathe in this area.