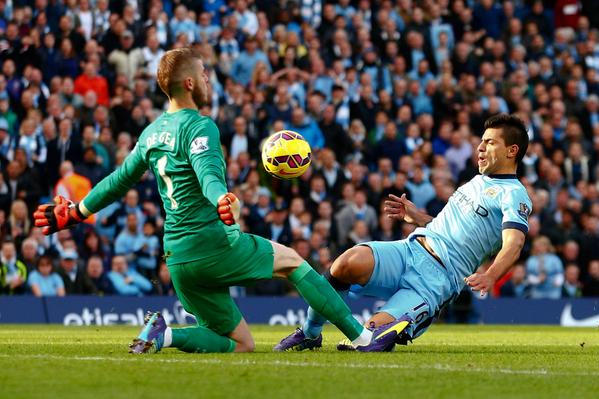 Sergio Aguero scored for Manchester City, as the noisy neighbours earned a 1-0 victory against Manchester United at the Etihad Stadium on Sunday.

Manuel Pellegrini made few changes from the side that lost 2-0 to Newcastle United in the midweek. Skipper Vincent kompany returned to the starting line-up while Sergio Aguero replaced Edin Dzeko as a lone striker.

Louis van Gaal made couple of changes as well. Antonio Valencia was introduced into the side as right back while skipper Rooney returns in place of Juan Mata.

The opening few minutes of the match saw both the sides trying to retain possession in the middle. The first real chance of the game fell to the home side – James Milner found Aguero into space from the left hand side; the Argentinian easily skipped past Valencia and hit the shot on target but was comfortably fisted away by De Gea.

Manchester United lodged a quick counter-attack and after exchange of few good passes in the final third, Van Persie knocked down in the path of Januzaj, who fired wide.

Robin van Persie lost the ball after a nice body-check from Kompany; Fernando cleared the ball in the path of Aguero, who did well to get past Rojo and take a shot on goal but was comfortably saved by De Gea.

City created another good move, this time from the right. Zabaleta galloping from the wings, gave a square passed to Jovetic, who nicely glided the ball to Navas – the Spanaird had the goal at his mercy, but De Gea once again saved it superbly.

Minutes later, Aguero had the best opportunity to put City ahead. This time from the left hand side, Aguero received a good floating cross and was put one-on-one with De Gea; the Spaniard once again proved to be the saviour.

The turning point of the match came in the 36th min, when Chris Smalling who already saw a silly yellow card, picked up another yellow and as a result was sent off after fouling James Milner outside the box.

Januzaj was replaced by Carrick, but with an extra man advantage City were enjoying more possession and pressed hard for the opening goal.

Right at the end of the half, Yaya Toure was badly challenged in the box by Rojo. After looking from various angle, it looked like a clear Red Card offence and therefore a legitimate penalty shout. United were lucky to be in the match, could have gone down to nine men & that would have been a catastrophe.

Half-time tactical analysis: Louis van Gaal started with a 4-1-4-1; now down to 10 men, he needs to shuffle his defence. Carrick returns to CB alongside Rojo.

City broke dangerously from the right hand side with Navas’s pace creating problems for the makeshift United defensive back-line. Shaw clears the danger from Navas’s good looking cross but Rojo badly damaged his shoulder in the build-up to the attack leaving United defence left to bare bones – young McNair replaced the Argentine defender, his third appearance for the club.

From a resulting corner, City appealed for a hand-ball, as the ball touched the hands of Daley Blind. However, it was completely unintentional and therefore no penalty was awarded.

Minutes later, City had another penalty shout. Aguero was pushed in the box by Fellaini, but referee Oliver turned it down for the third time.

It was coming. Barrage of City attacks finally paid dividends. Clichy made a good run on the left and from his inch-perfect low cross, Aguero slots home for the home side, his fifth against United.

City now looking to kill the game off. Milner from the left passed on to Jovetic who made some space for himself and went for the curler on the far post, but De Gea saved it superbly yet again.

Few minutes later, Van Persie produced a moment of sublime skill and magic, skipping past two players and got himself into the box but fired straight into the hands of Joe Hart.

In the 75th min, Aguero came close to scoring again after a sleek passing movement outside the box, involving Navas and Nasri. Seconds later, Navas was put through by Toure; the Spaniard kept great composure but only managed to hit the post.

Wayne Rooney from the middle of park surged forward and produced sublime skill to get past Kompany, but despite series of attempts from him, Van Persie and De Gea, United couldn’t hit the target.

Fellaini got a golden opportunity to put things back on track for United but couldn’t connect his header properly. In the 85th min, the Belgian came close again, after Di Maria whipped in a brilliant delivery from corner, but he couldn’t hit the target.

Toure came close to scoring for the home side in the extra time. His header went over the bar. Before that he tried to curl the ball past De Gea, but went off target.

Final thoughts: After two defeats and a draw in their last three matches, this victory would lift City’s spirits again. They are not yet out of title race.

Man of the Match: Sergio Aguero