Reigning Serie A champions Juventus are targeting players who will be free agents in the summer and have shortlisted three potential targets – one of them is Manchester United skipper Nemanja Vidic.

According to reports from Tuttosport, as you can see in the image below, Juventus are targeting Vidic, Real Madrid’s Xabi Alonso and Jeremy Menez of Paris Saint Germain, all of them will be out of contract in the summer.

The 32-year-old, who joined the Old Trafford club in 2006, will become a free agent in June. The rumours of him joining an Italian club is nothing new, rather it is easy to speculate as his agent Silvano Martina is very experienced in Italy and has another valuable client in Juventus legend Gianluigi Buffon.

Vidic has been linked with Juventus and AC Milan for a while now. Last month, it was reported in the same paper that both Juventus and Milan are targeting to land him next season as he has yet to sign a new contract with the Old Trafford club. 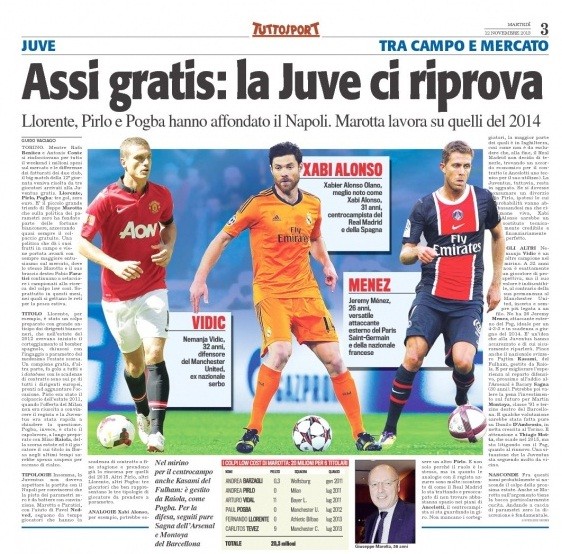 Carlos Tevez, former Manchester United player and now at Juventus, who has played with Vidic before, added fuel to the fire, by saying as quoted in Tuttosport: “He’s very strong, a really good defender. I played with him and against him, when I moved to Manchester City. Of course he’d be very suitable for the Italian championship.”

Vidic suffered concussion during Sunday’s Barclays Premier League encounter with Arsenal after colliding with team-mate David de Gea and was sent to hospital for examination by the club. He was released from the hospital but no timescale has been put on his return to training. It seems like unless he puts pen to paper, rumours will continue to fly around.