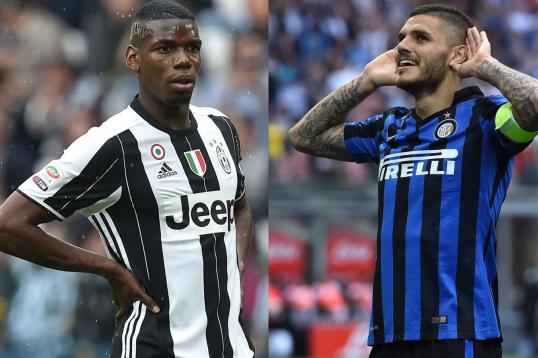 According to TMW, Italian side Napoli are currently meeting with Inter Milan officials over the transfer of captain Mauro Icardi, with talks said to be ongoing over the 23-year-old, who could potentially be the final piece of the Paul Pogba transfer jigsaw for Manchester United.

Sources in Italy (via Sky Sports) claim that Napoli could spend up to €55m on the striker, who would seemingly replace Gonzalo Higuain who reportedly had a medical at Serie A champions Juventus over the weekend, with the Old Lady said to be willing to pay his buy-out fee, which is set at around the €94m mark.

The reports over the two moves have stemmed from the potential world record transfer of Paul Pogba to Manchester United.

United are said to have offered over €100m for the midfielder, who left Old Trafford for Juventus on a free in 2012, with multiple sources claiming that the deal is close to completion.

United have already signed Eric Bailly, Zlatan Ibrahimovic and Henrikh Mkhitaryan this summer, with new manager Jose Mourinho hinting this weekend that another major transfer is in the works. Mourinho, who left former club Chelsea halfway through last season, has previously said that he and the club are after four new signings, and with three already completed, the Pogba deal looks to be the last big-money signing for the Red Devils this summer.

If Pogba does return to Manchester, Juventus will seemingly splash the cash on Higuain, who broke the Serie A record for most goals in a single season with Napoli in the 2015/16 season, scoring an impressive 35 times.

The Old Lady have also been linked with a move for Barcelona utility man Javier Mascherano who would be a replacement for the 23-year-old Pogba.

Icardi has now come to the fore in what looks to be a record-breaking summer of transfers, with Napoli ready to swoop for the Argentine to replace Higuain, with United’s little regard for the world transfer record in their pursuit of Paul Pogba potentially sparking a big-money merry-go-round the likes football has never seen before.