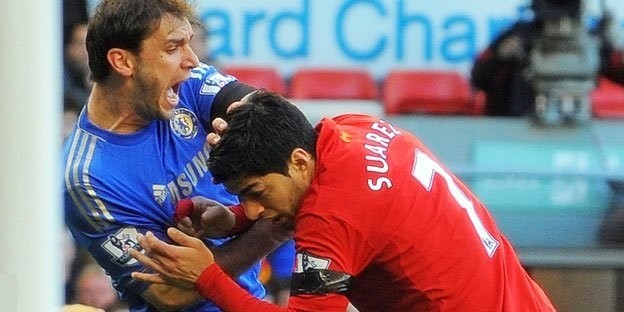 Once more, the ugly side of English football’s most unpopular superstar has emerged, bringing with it another episode of bizarre lunacy to add to his ever growing catalogue of misdemeanours.

His latest offering, taking a bite out of Chelsea defender Branislav Ivanovic’s upper arm during the 2-2 draw at Anfield, has drawn yet more outrage from the football community, and threatens to totally undermine his heroic exploits for the Reds this season.

How does Luis Suarez, a man who just last week was nominated for PFA Player of the Year, expect to thrive as a player when shackled by his own malevolence?

Without question one of the most talented players in the Premier League; Suarez’ touch, vision, tenacity and penchant for goal-scoring has endeared him to Liverpool fans everywhere.

But the South American’s other ‘talent’ is a lot more sinister; he is consistently able to inflame and enrage a whole spectrum of different players, managers, fans and pundits with his antics, which range from the annoying to the downright machiavellian.

There can be no hiding from the fact that the Uruguayan is firmly down the wrong path. With his bite in the Chelsea game, he has taken away from the fact that he provided an exquisite cross for Daniel Sturridge to score, and then equalised at the absolute death to rescue Liverpool from the jaws of defeat.

Instead, Suarez has let his own jaws do the talking, and ex-Liverpool man, Jamie Redknapp, believes that the situation is getting out of hand. Redknapp, also a Sky Sports analysts, said:

“There is that madness-genius gene in him because as a player he’s exceptional, with people talking about him being player of the year, but what he did today, is indefensible.”

Utter shock and disbelief reigns. But it is certainly not the first time Suarez has grabbed the headlines for entirely the wrong reasons. In fact, it is not even the first time he has bitten an opponent! He received a ten-match ban for inexplicably gnawing on PSV Eindhoven midfielder Otman Bakkal’s shoulder during a game in 2010.

During his time at Anfield he has also received a lengthy ban for racially abusing Patrice Evra, ‘stamped’ on Wigan’s Dave Jones, and most recently, punched Chile’s Gonzalo Jara during a match for Uruguay.

While he has begun reparations with an apology made to the Serbian defender after the game, it will certainly not be the last words said on the incident. Suarez released a statement which read:

“I have issued an apology and have tried to contact Branislav Ivanovic to speak to him personally.

“I apologise also to my manager, playing colleagues and everyone at Liverpool Football Club for letting them down.”

Liverpool boss, Brendan Rodgers, deserves this apology, as he will be under massive scrutiny as he deals with the fallout from yet another Suarez misadventure.

Like a teacher disciplining a child, Rodgers must take action, not only for his striker’s sake, but for the sake of the club. Kenny Dalglish’s ‘white t-shirt’ response to the ‘Suarez-Evra’ racism scandal last year certainly aided in the Scot’s eventual downfall, and Rogers has a duty to uphold the values of the club. 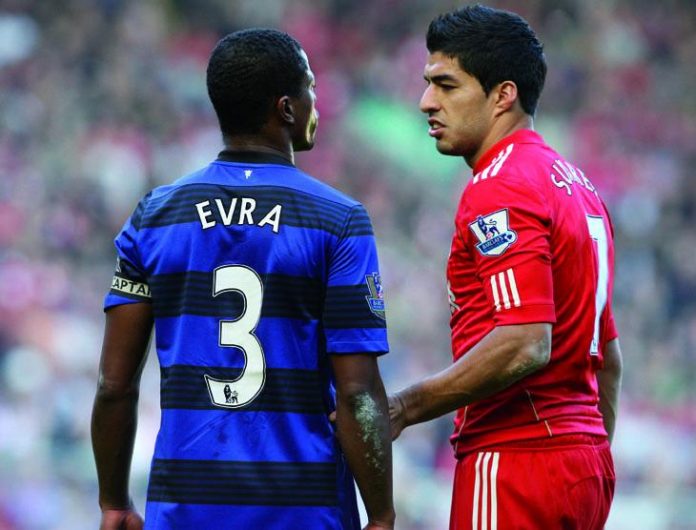 He knows that there can be no defending his best pupil this time, and despite his footballing brilliance this year, the Liverpool boss must face the fact that Suarez’s actions could harm Liverpool, beyond the ban he will surely be handed to him.

Former Liverpool boss, Graeme Souness has echoed these sentiments, and goes as far as to suggest Suarez’ could even be heading for the exit, ushered there by the club. Souness was performing his pundit-duties on Sky Sports, when he commented:

“I’m not sure what to make of it really, embarrassing.

“A football club’s board of directors’ job is to attract and get the best football players and keep them at the football club.

“He is making it very difficult for himself to stay at Liverpool, I believe that puts him in the last chance saloon.

“More important than any of that is to safeguard the good name of the football club. This club is a world renowned football club. It is up there with any Barcelona, Real Madrid, Manchester United.”

This story will gather extraordinary pace over the next few days, and it will most likely end with Suarez receiving yet another ban; a ban which could see him sidelined for the rest of the campaign.

There can be no doubt that Suarez is the premier entertainment in the Premier League, for so many reasons. But one can only hope that he somehow quells his mad streak, and focusses solely on his tremendous footballing ability. Suarez is a player most love to hate; and while the FA may ban him, and his manager may struggle to defend or chastise him, only he can help himself.