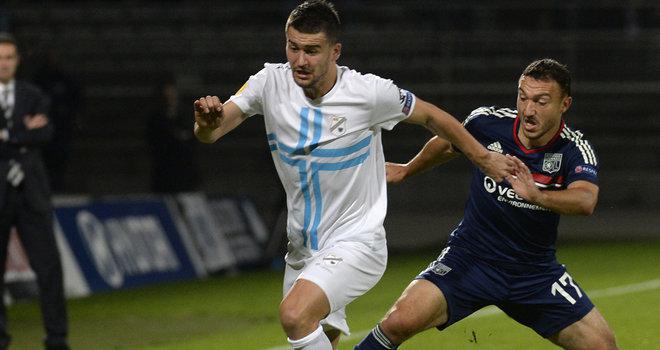 Lyon grabbed their first win of this year’s Europa League campaign with a 1-0 victory over Croatian side HNK Rijeka to go top of group I.

A 66th minute winner from midfielder Clement Grenier sealed the victory for the French side, who had previously gone five games without a win in all competitions.

It was the first time the two sides had met. The last time Remi Garde’s men faced Croatian opposition they recorded their biggest ever away win; with striker Bafetimbi Gomis scoring four in a 7-1 drubbing of GNK Dinamo Zagreb.

Sitting uncomfortably in 11th place in Ligue 1, Lyon got off to a poor start and it was like a card game at times as both teams gave little away in what was a tight first half.

However, that all changed just after the hour mark when a Steed Malbranque cross was powerfully met by Grenier to put the home side in to the lead.

Lyon had been close to breaking the deadlock just before half-time when goal-scorer Grenier, who had been causing problems all evening, saw his shot saved by the feet of the Croatian stopper.

After the break, the French hit man continued to threaten the goal, firing a low shot that narrowly missed the far post from 18 yards.

It was a frustrating performance from Lyon at times, against a team who have only picked up one point in the competition, but HNK posed little attacking threat-registering just one single shot on target throughout the entire match.

That one shot could have proved pivotal, though. A quick counter- attack from the away side led to a forced clearance by Josip Brezovec before an Ivan Krstanovic header in the 86th minute wasn’t enough to really test the Les Gomes keeper.

Lyon, who are still hunting for their first major European honour, will be desperate to succeed in this year’s tournament. Bringing the Europa League to the Stade Des Garland has been cited as a keen aim for the club before they move to their new multi-million Euro stadium Stade Des Lumieres in 2015.

Construction work for the new 58,0000 stadium has begun after an initial delay, kick- starting an exciting new footballing period for the club and the country, with France also hosting the European Championships in 2016.