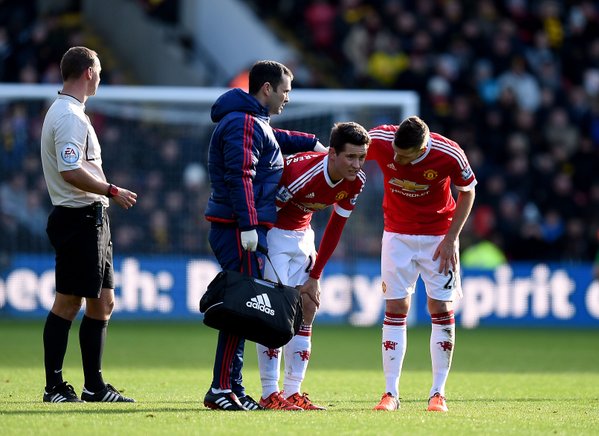 The Red Devils were without the services of first choice striker Wayne Rooney and Anthony Martial as the star duo joined four other players missed the trip to the Vicarage Road. In their absence, the Dutchman started Memphis Depay as the main striker.

The former PSV Eindhoven star opened the scoring and United were on the course to win the match, until Watford for given a chance to equalise from the penalty spot. Troy Deeney converted with minutes before the stoppage time and levelled the score. However, he scored an own goal in the dying minutes which allowed United to take lead once again and seal three points.

Hererra was replaced in the first half by Marcos Rojo as United shifted to a three-man defence. Jones was replaced in the second half by Paddy McNair as the latter returned from injury. Wilson on the other hand had not featured due to a knee problem. Van Gaal admitted that none of the injuries are serious, but he expects the trio to be out for the upcoming clash against PSV.

“We are in a lousy period with a lot of injuries. Also in the international break. Antonio Valencia was operated on and Luke Shaw you know, and now Jones and Herrera, I think, are not available for Wednesday,” Van Gaal told United’s official webiste.

“My first impression is that they are not too heavy but the problem is that we have to play Wednesday already. Jones had a twisted ankle and Herrera a hamstring injury.

“Wilson had a swollen knee after training. I did not play [Marcos] Rojo also because when you have jet-lag you cannot play.

“Wilson did not play for six weeks, so you cannot play in the Premier League without match rhythm; you have seen with Memphis that in the second half he was less [effective]. I had Rashford on the bench, a fantastic talent, but Wilson has more experience in the league.”

Rooney missed the Watford tie due to illness, while Martial picked up an injury while on international duty with France. Van Gaal remains hopeful the duo could return when United host PSV in the European fixture on Wednesday.

“Rooney is ill, and that is a matter of days, not weeks.  I expect that he shall play Wednesday, but you never know, I do not know the development of the illness,” United manager said.

“Today he is at home, we gave him a day off to heal the illness; tomorrow he comes and I can say more. Martial is another problem, his foot, it is not as heavy as the media have written but we have to wait and see if he can play Wednesday.”