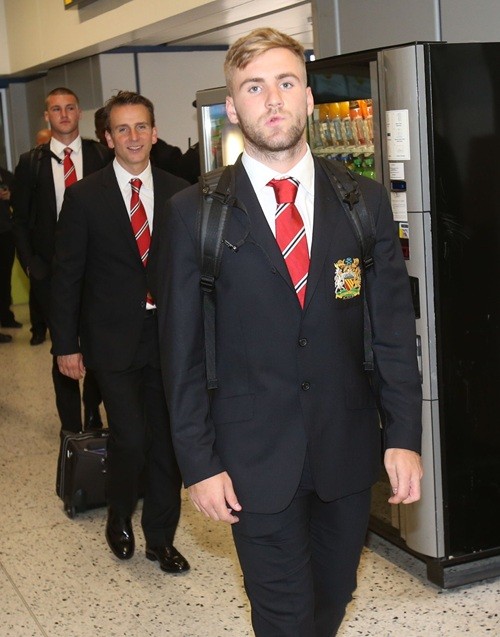 Manchester United manager Louis van Gaal has admitted that he hopes to see Luke Shaw play this season following a double fracture during his side’s 2-1 defeat to PSV Eindhoven.

The incident took place inside the box in the 15th minute of the first match of the Champions League where the Dutch side’s player Hector Moreno’s tackle law Shaw go the ground quickly. He was in pain and was stretchered off the field with a help of an oxygen mask.

The former Barcelona and Bayern Munich manager admitted the England international was in tears after his horror injury. He believes Shaw will not play in the group stages of the Champions League.

Louis van Gaal on Luke Shaw's injury: "He won't play in the group stage, I don't think. I hope he will play again this season." #mufc

“I’m not a doctor so I cannot say, but when you have a double fracture it is four to six months. But you can never say that in advance. He won’t play in the group stage, I don’t think. I hope he will play again this season,” Van Gaal said.

“He has a double leg fracture. He is in the hospital and shall be transferred tomorrow with us, maybe, or perhaps a day later. He shall be operated in Manchester.

“It’s awful. He’s an 18-year-old boy who comes to Manchester and his first season is very difficult. Then he has a fantastic second season and this happens. When he came into the dressing room he had an oxygen mask and was crying.”

On Moreno’s challenge, United manager said, “When I say it’s a penalty and a red card, I’m a bad loser. It was a bad tackle with two legs. Every word I say is always interpreted in the wrong way. It was in the 16 metre and it was a very bad tackle, with two legs.”

Shaw moved to Old Trafford from Southampton in the summer of 2014. He had a disappointing debut season with the Red Devils. After following the regime given by Van Gaal before the start of the pre-season, the left-back has improved his game.

The 20-year-old was one of the star players for United in 2015/16 campaign. He was replaced by Marcos Rojo against PSV. The Argentine international is likely to be started in that position, while Daley Blind can also play as a left-back.

Several United players took on social media to wish Shaw a speedy recovery. Here are some tweets below:

Defeat hurts, but @LukeShaw23's injury hurts even more. We hope you come back even stronger!

My thoughts and prayers are with @LukeShaw23 Hoping for a quick recovery and to be playing alongside him again as soon as possible! 🙏🏽

Very disappointing night for us. Wish @LukeShaw23 a speedy recovery, gutted for you, stay strong mate

Sad about the defeat but much sadder about Luke's injury. Come back soon my friend pic.twitter.com/VHO6gusvF2