After Liverpool’s amazing victory over AC Milan in the 2005 champions league final, may disgruntled fans of Manchester United, Chelsea and Arsenal accused Liverpool of being lucky and undeserving winners.

After all, how could England’s 4th best team achieve such a mean feat? Manchester United could only do it once despite their decade of dominance. Chelsea’s billions and Arsenal’s pretty football haven’t been good enough either.

It must be luck, right?

I saw an interesting and compelling argument on the rivals.net web site. It went something like this….

Just like all the luck we had last time eh!!

The year is 2007 and 6 year old Mong fan Chalks is talking to his Dad.

SON “Dad, my mates in school told me that Liverpool won the European Cup for the 5th time in 2005 – are they right dad?”

DAD “Yes son, it’s true, but they were dead lucky son, all the way through the tournament”

DAD “Well in the group stages …”

SON “What dad, did they have a team from Azerbaijan, Israel, and Ireland in their group?”

DAD “Well no, they had Monaco, Deportivo la Coruna, and Olympiakos”

DAD “Actually Monaco reached the final the year before, Olympiakos had won their league 7 times out of the previous 8 seasons, and Deportivo finished above the galacticos of Real Madrid in their league”.

SON “Jeez dad, that sounds like quite a difficult group then”.

DAD “yeh I suppose your right son, but they were still lucky – it took a mishit shot by Gerrard against Olympiakos to get through”.

SON “oh ok. Well what happened in the last 16 dad, who did they draw?”

DAD “Exactly son, but they had beaten Real Madrid 3-0 at home, and won their group that included Dinamo Kiev and Roma too.”

SON “So did they win on away goals or something”

DAD “Well they did – they won 2-1 at home, and cruised to a 0-0 away draw without Juve having hardly any chances”.

SON “Were Juve s*#t at that time – had all their decent players gone or something?”

DAD “Well actually they still had players like Del Piero, Nedved, Ibrahimovic, Thuram, and Buffon in the side. And they won Serie A a few weeks later.”

SON “wow, they beat the Italian champions elect – which p**s easy team did they get in the semi then?”

SON “Chelsea – for f#*ks sake – what a p!*s easy draw – they’ve won nothing, Everton have won more than them”.

DAD “Not quite son, AC Milan awaited them in the final”

SON “No way – aren’t they the 2nd most successful team in the competition’s history”.

DAD “Yes son they are”

SON “What happened, did they have 3 men sent off in the second half – how did Liverpool get back into the game?”

SON “Against the best defence in Europe”

DAD “Yes!!!, against the best defence in Europe”

SON “So what happened next – extra time?”

DAD “Yes son, and Dudek made the luckiest save ever to stop a Shevchenko shot from a yard”

SON “Why was it lucky dad – did it hit him on the arse, nose, shoulder or something”

DAD “Yeah, but that’s besides the point”

DAD “Not this f#*kin time they weren’t – they only missed one. And that’s how Liverpool became the luckiest team to win the European Cup”.

SON “But I bet when they brought the cup home there was hardly anyone to watch as all Liverpool fans live anywhere but Liverpool you say. How many was there, 5,000 or so?”

DAD “That about sums it up son”

SON “Can I have a Liverpool shirt for my birthday next week, and can you stop calling me Chalks – I’m Stevie from now on”

Do you still think that they were lucky? 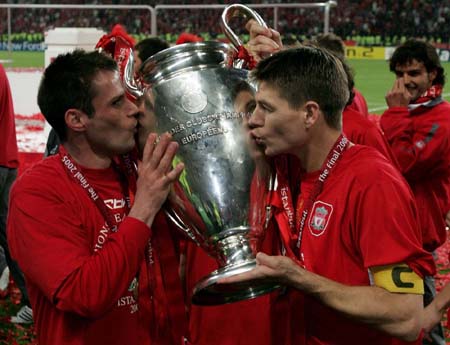