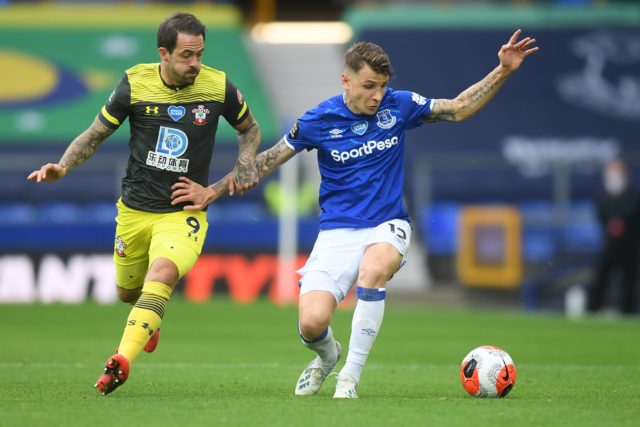 Everton left-back Lucas Digne is set for a spell on the sidelines after suffering an ankle injury in training.

The Frenchman, who signed for Everton in the summer transfer window of 2018 from Barcelona, has made a fine start to the season, recording four assists in eight appearances. Only Tottenham Hotspur’s Harry Kane and Aston Villa’s Jack Grealish have set up more goals in the Premier League this campaign.

Digne’s form has been vital to the Toffees this season, who currently sit in sixth place after coming away from Craven Cottage as 3-2 winners – Digne himself assisted two of the goals.

However, Carlo Ancelotti has been hit with some bad news, as the former Paris Saint Germain full-back has reportedly suffered an ankle injury during training and is set for a lengthy spell on the sidelines.

The extent of the injury is currently unknown. However, France Football reports that the 27-year-old is likely to be out for at least two months.

This will leave Ancelotti with just youngster Neils Nkounkou available at the left-back spot. The young Frenchman has played just 69 league minutes this season in the 2-1 defeat to Newcastle United. However, he also started all three of Everton’s EFL Cup victories, registering an assist in the 5-2 away win over Fleetwood Town.

The injury will come as a huge blow for Lucas Digne on a personal level, as he looks to nail down a starting spot for the French national team for this summer’s European Championships.

Competition for places is already high, with Ferland Mendy, Lucas Hernandez, Theo Hernandez, Benjamin Mendy, and Layvin Kurzawa among those looking to impress Didier Deschamps. A spell on the sidelines could severely hamper Digne’s chances of securing his place in the starting XI.