According to Spanish publication Marca, Liverpool have spoken to Carlo Ancelotti.

Following a catastrophic campaign in the league as well as Europe, Brendan Rodgers’ future is clouded with uncertainty. Having missed out on the Champions League and domestic cups, it is believed that FSG might be looking for a change this summer. 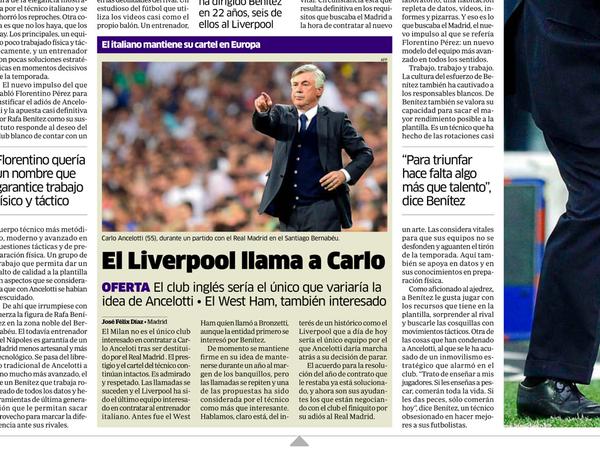 One of the more disappointing aspects of Liverpool’s season is the constant transfer failures that are a key feature of Brendan Rodgers’ reign at Anfield. Since the arrival of the former Swansea manager, the Reds have spent in excess of 200 million pounds and have failed to sign one world class player.

It is understandable that Rodgers, a young manager has failed to attract top talents over the years, but his inclination towards Premier league proven talents has cost Liverpool a lot of money, without significant reward.

FSG are keen to bring in a world class manager with pulling power and Ancelotti is that man.

Carlo stated earlier that he will take a year off, following his sacking at Real Madrid. However, the Italian holds Liverpool in the highest regard and is willing to change his plans for them.

Marca state that Liverpool are one of the few clubs that Ancelotti wants to manage and is seriously considering their offer.

Whether there is any substance to the story, remains to be seen, but Ancelotti would be a massive upgrade on Brendan Rodgers. Not just in terms of coaching, but in terms of making Liverpool a far more attractive prospect for quality players as well.