Liverpool vs Sevilla: Riot police called in after fights broke out between rival fans 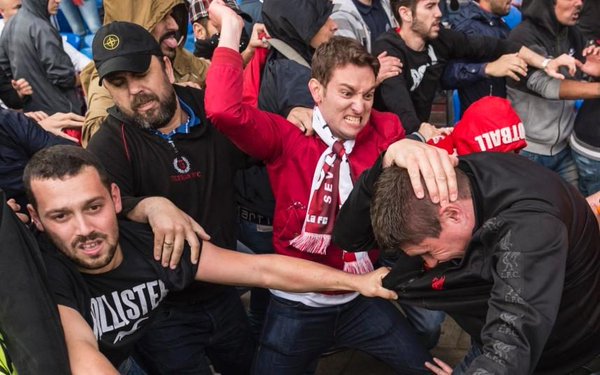 Liverpool fans had to endure a tough night on Wednesday on their trip to Basel. Not only were they left heartbroken with a Europa League final defeat to Sevilla, but got themselves involved in a skirmish with the rival fans ahead of the match at St Jakob-Park stadium.

Sevilla had managed to sell only 7,000 of their 9,000 allocated tickets while Liverpool fans appeared to have occupied to be almost three-quarters of the 35,000-capacity ground.

Liverpool manager Jurgen Klopp got carried away when he urged 100,000 Reds fans to turn up in Basel and even encouraged supporters to move in without tickets, although he later apologised for his comments saying those were not to be taken in literal sense.

It was a foolish decision on UEFA’s part to organise a mega event like Europa League final at a stadium with a smaller capacity knowing there would be a huge demand for tickets from both sets of fans.

There was no segregation in the end where Sevilla fans lined up, and a scuffle broke out between 20 to 30 supporters prior to the match.

Now riot police standing between Sevilla & Liverpool fans at one end of stadium where scuffles broke out earlier. They are the segregation.

The incident took place behind one of the goals where both sets of fans merged at the Basle stadium. The ground stewards quickly intervened before police arrived to line the aisle between two sections and provide some segregation.

Soon after, riot police, wearing protective helmets and wielding batons were posted behind the Liverpool goal and kept a close eye in an effort to keep the rival fans apart.

Winning the Europa League was Liverpool’s only chance of making into Champions League for 2016-17 as they finished eighth in the Premier League.

The Reds made a good start and scored early through a fine individual brilliance from Daniel Sturridge but for the umpteenth time this season, they had failed to hold on to their slender lead.

Liverpool collapsed dramatically in the second half with a brace from Coke and one from Gameiro saw Sevilla winning the Europa League for the third time in a row.