Following an incredible title challenge last season, few would have expected Brendan Rodgers and Liverpool to start the season as badly as they have. Regardless of the departure of Luis Suarez, the man who was instrumental in Liverpool’s astonishing rise from mediocrity last season, the 100m plus influx of talent provided much optimism for the fans.

There were suggestions during Liverpool’s massive outlay that the Merseyside outfits were ‘doing a Spurs’. A similar outlay from Tottenham, to replace Gareth Bale, backfired last season and critics predicted a similar outcome for Liverpool. While there is a long way to go and it is awfully early for comparisons, shades of Soldado and Lamela can be seen in the likes of Balotelli and Markovic.

Return of Daniel Sturridge, who has been rather unfortunate with injuries since the start of the season will be a welcome boost for the Reds, but it is evident that the Premier League runners up are in desperate need of new signings.

With about 7 weeks left for the January transfer window, we have drawn up a list of three possible signings who are affordable, available and could galvanize the Reds.

Alexandre Lacazette – The Lyon front man has been in scintillating form since last season and has been linked with moves away from France since the summer. The need of a versatile striker at Liverpool has never been more apparent.

Lacazette’ creativity and intelligent link up play will be of great value to Liverpool, especially with Sturridge’ injury problems. His dribbling, work rate and intelligent pressing of defenders will also suit the Brendan Rodgers’ style of play and would add more energy and guile to Liverpool’ attack. Lacazette is also an accomplished finisher and should be one of the first names of Rodgers’ shortlist.

Ignacio Camacho – Liverpool’s midfield has been subject to massive criticism, not just this season, but since the departures of Alonso and Mascherano. The lack of a specialist defensive midfielder and the regression of club captain, Steven Gerrard have meant that Liverpool’s midfield lacks the power and presence that it once possessed under Rafa Benitez. Despite trying the likes of Gerrard and Lucas in that position, the reds have been bullied and outnumbered in the midfield far too often, due to the poor positional sense of the two players.

Camacho is the type of midfielder who would bring much needed tenacity and work rate into the Liverpool midfield. The defensive midfielder from Malaga is capable of breaking up the play and setting the tempo with his defensive and playmaking abilities. His intelligent positional sense and good passing skills would make him an excellent fulcrum, allowing the likes of Gerrard and Henderson to play their natural game.

Samir Handanovic – It’s about time Liverpool signed someone to challenge their keepers. Pepe Reina never really had any competition while at Liverpool, and it has been the same for Simon Mignolet as well. Despite coming up with crucial saves time and again last season, Mignolet has been below par overall. 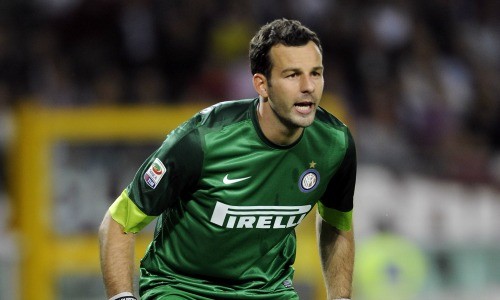 Several errors and his failure to command the box and organise his defence has brought severe criticism upon the former Sunderland keeper. Handanovic will bring much needed composure and an aerial presence at the club and perhaps help sort out Liverpool’s faltering backline. Although it is understandable that Inter are reluctant to let the player go, Italian clubs have always been willing sellers for the right price.