Well, Liverpool fans would jump in joy as we are about to report the most shocking transfer rumours that Serie A giants Inter Milan have planned for in the upcoming January transfer window. If Italian Media outlet Tuttosport is to be believed then, Inter are planning a triple transfer raid on Liverpool in the upcoming transfer market. It is believed that the Nerazzurri who have appointed Roberto Mancini as their new manager have set their sights on Fabio Borini, Mario Balotelli and Glen Johnson. 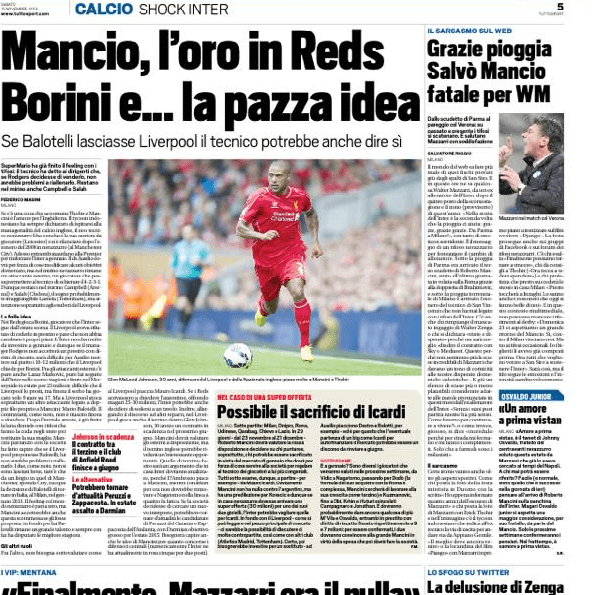 The report claims that Inter President Erik Thohir and Roberto Mancini both have a fascination in the upper echelons of English Football. We have reported over the past few days that Inter have their eyes set on Borini on a loan deal in January with an option to buy in the summer.

Inter, however, don’t have enough transfer budget to invest heavily in the winter. Thus it will be difficult for them to sign any top player on a permanent basis in January.

The San Siro outfit are also interested in signing Liverpool’s Lazar Markovic on a loan deal. The Serbian who signed for £20m from Benfica in the summer has hardly featured for the Anfield side. Thus a loan deal would suit both sides as Liverpool would believe that Markovic is bound to improve if he gets enough game time elsewhere rather than warming the sidelines at Merseyside.

Glen Johnson is another player that Inter want to recruit to solve their defensive issues and given the English International’s contract expires in the summer, Liverpool can also push for a permanent transfer.

Last, but not the least, Mancini could also be willing to sign Mario Balotelli. The duo had a spat while they were at Manchester City but as the report claims, Mancini has always considered Balotelli as a world class talent and both share a father-son type relationship off the pitch. The controversial Italian though has drawn blanks after having signed for the Reds in the summer and is yet to score in the Premier League. It is thus assumed that Liverpool might actually sell him to raise funds for a top class striker in January.

However are all these transfers possible? Don’t laugh if you’ve just believed that Inter have taken it upon them to clear Liverpol’s deadwood. Eh?