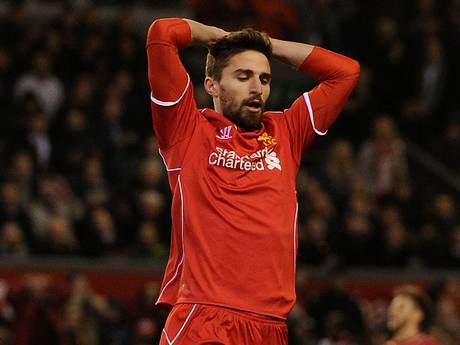 Sky Sources: Liverpool in talks with Fiorentina over the transfer of Fabio Borini #SSNHQ

Borini has been at Anfield since 2012, but has only managed to make 25 appearances in the Premier League. His record of just 2 goals though, makes that hardly surprising. Billed as a future star during his younger days at Chelsea between 2007 and 2011, he has failed miserably at living up to his potential.

After a poor start to his life at Anfield in the 2012/13 season, he was sent on loan to Sunderland the following campaign. He performed much better there, scoring 10 goals in all competitions. Brendan Rodgers recalled him to his squad, but he failed to make any impact whatsoever last year, as Liverpool struggled for goals up front and finished 6th. Mario Balotelli and Rickie Lambert didn’t find their form, while Daniel Sturridge had injury problems throughout. Borini got his chances, but couldn’t do anything to provide any encouragement to his manager, scoring just once.

Now, the club have signed two strikers in Danny Ings and Christian Benteke and Borini’s chances of getting regular first-team football have been further dented. It will be best, therefore, for the two parties to part ways. An official announcement could be soon on the cards.