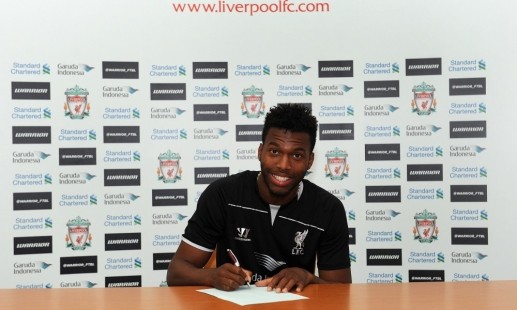 Liverpool superstar Daniel Sturridge has committed his future to the Reds after signing a new long-term deal on Friday.

The England international was signed by Brendan Rodgers from Chelsea in January 2013 and since his move to Anfield, the striker has been in prolific form scoring 36 goals from 52 appearances.

“Liverpool Football Club are delighted to announce Daniel Sturridge has signed a new long-term contract. The 25-year-old has committed his future to the Reds by penning the deal at Melwood today,” a statement read on Liverpool’s official website.

The former Chelsea and Manchester City man has expressed his greatest joy after extending his stay with the Merseyside club.

“It feels great. It’s a big, big day in my life to commit to this club and to give the club my best years, which are ahead of me,” Sturridge said.

“I am thankful for the opportunity and that is the reason I committed my future. Everyone has been great with me, from the fans to the staff to the players, so it was an easy decision. I’m happy with how everything is going.”

The 25-year-old is still on the sidelines, recovering from a thigh injury which he picked up during the international break last month. He will miss Liverpool’s league clash against West Bromwich Albion.

Sturridge remains confident that he will be able to lift trophies with Liverpool and that is why he signed a new deal with his current employers.

“We were so close to success last season and it was a bitter pill to take not winning the league, but that’s just a taster of what the fans will get – but hopefully this time we’ll have the trophies to show for it,” the striker stressed.

“Everyone is very obsessive in terms of wanting success and being winners. That’s what we are – that’s the Liverpool Way.”