Liverpool are expected to do few transfers from now on till the end of the window. The Reds have already made six signings so far and are close to completing the signing of Javier Manquillo, who is supposed to undergo a medical at Liverpool. Now that the right-back slot has been sorted, albeit temporarily, Brendan Rodgers has turned his attention towards signing a left-back. And if the reports are to be believed the Reds have intensified their efforts in signing Alberto Moreno from Sevilla.

Yesterday, Estadio Deportivo claimed that representatives from Liverpool had flown to Sevilla to hold talks over the transfer fee. They claimed the transfer fee would be around €20m. Marca has covered a lengthy report on it and claim today that Liverpool would include young dazzling forward Suso as a part of the deal, taking the total transfer value in excess of €20m, which should be enough to persuade Sevilla to sell their star player. 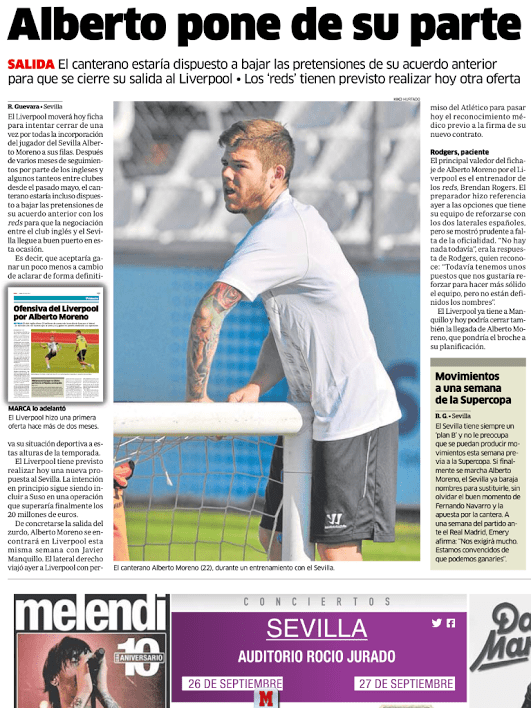 We think that there won’t be any problem for Moreno to agree personal deals with Liverpool. Plus, there is no reason why he should reject an offer from a top club that can offer him Champions League football this season. Sevilla had shown earlier a doughty refusal to wilt under pressure from Liverpool, and it remains to be seen, how quickly the Reds can get their top target and focus on buying one or two players before the window slums shut.