Premier League announced its latest set of fixtures for the 2015/16 season this morning.

While the fixture list is certainly interesting in terms of a gripping title challenge, one team and one man in particular will be considerably displeased with their start to the season.

Last season was not kind to Brendan Rodgers and it seems the first half of next season could be worse. Judging by Liverpool’s first seven away games, it seems lady luck has well and truly abandoned the Northern Irishman.

Despite the home comforts in the first few weeks, Brendan Rodgers will have to undergo a baptism of fire away from home in the first seven weeks. 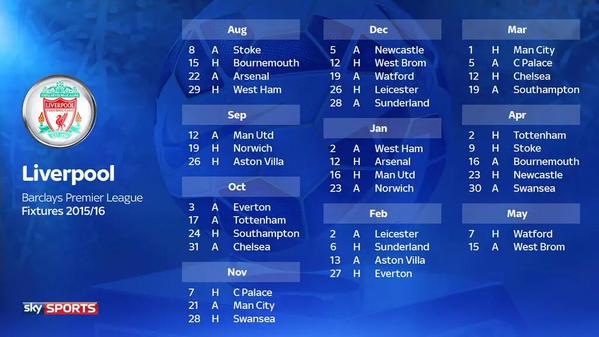 The Reds will play the likes of Manchester United, Manchester City, Chelsea, Arsenal and Tottenham along with the Merseyside Derby in six of their first seven away games next season.

And to compound the misery on the red half of Merseyside, Liverpool will start their season at the Britannia, where they ended last season on a humiliating note, losing 6-1 to Mark Hughes’ men.

At one point this summer, it looked like Brendan Rodgers might be handed his p45 and with the new fixture list announced, Rodgers’ future has once again taken centre stage as the topic of discussion amongst the fans.

The general consensus around the club is if Liverpool were to start the season poorly, FSG will draw the curtains on Rodgers’ tenure. But the ridiculous set of away fixtures in the first few months mean that Rodgers will now have it tougher than ever.

Such a scenario begs the question, how long has he got left?

Rodgers’ record against top teams/managers is nothing short of abysmal. The likes of Mourinho, Van Gaal, Pellegrini and Wenger have demolished his sides away from home time and again.

Judging by the way those teams have been strengthening /aiming to strengthen, it is perhaps a tad unrealistic to expect a change in that trend.

While one could argue that Liverpool are yet to strengthen properly and might end up having a better window than all of the aforementioned teams, it is important to remember that personnel have hardly been the issue for Liverpool against top sides.

As harsh it may sound, Rodgers has often been tactically outplayed, outthought and outsmarted by his peers.

When Liverpool go into their horrendous run of away games, the only thing Liverpool fans need to ask themselves is if Brendan has learnt from his mistakes, FINALLY. (although the first 3 seasons proved otherwise).

Furthermore, starting away at Stoke is a tricky beginning. While it is expected that the players will be motivated, considering what happened last month, a negative result could send the side into a downward spiral immediately.

At first what seemed like a bit of persiflage from the automated fixture generating machine, it is actually good for Liverpool to play Stoke away right at the start. The players will be keen to get last season’s horror out of their system early and could really kick on for their dreadful away trips with renewed hope.

All in all, these are dark times for Liverpool and especially Brendan Rodgers.

If last season was tough, it is only going to get tougher for the former Swansea boss. As for the Reds around the world, hold on this ride is about to get bumpy.

There might well be a golden sky in the end, but the question is, can Brendan weather the storm? Let us know what you think in the comments below.