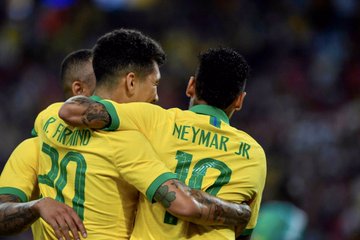 Liverpool striker Roberto Firmino scored a brilliant goal for his country on Thursday.

The 28-year-old striker scored with a delicious chip and won plaudits for his display for Brazil in a friendly clash against Senegal in Singapore.

Firmino’s club teammate Fabinho also travelled with the side for the fixture, while Sadio Mane played for the opposition.

The Liverpool forward, who has been in brilliant form for his club, wasted no time in getting his name on the scoresheet as he scored the opener after just nine minutes with a delightful chip.

Many Liverpool fans have taken to social networking site Twitter to express their reaction. Needless to say, they are pleased to see their hero performing well for his country.

Best in the world is Bobby firmino 💃💃 #LFC https://t.co/4kA0BGuOKu

Firmino will find ways to humiliate players even when he doesn’t need to. 😂 pic.twitter.com/m7Vqox8OQ3

Firmino is on fire. What a chip🔥 https://t.co/crhY0lYsgT

Firmino has been in great form this season, scoring once and providing three assists for the Reds in all competitions since the last international break.

The Liverpool fans and Jurgen Klopp will be pleased with the fact that he is maintaining his form whilst on international duty.

Liverpool have a tough set of fixtures after the international break, starting with a trip to Old Trafford to face Manchester United.