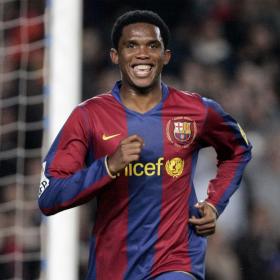 Liverpool have suffered some setbacks in this transfer window when it comes to strikers. After selling last season’s top-scorer Luis Suarez to Barcelona for a mammoth fee of £75 million, their efforts to replace the Uruguayan have been scuppered time and time again. After a transfer for QPR striker Loic Remy was reportedly finalised, his move to Anfield broke down in extraordinary circumstances when he failed a medical.

Subsequent attempts to sign big-name players in Karim Benzema, Radamel Falcao and Marco Reus were all thwarted, and the Reds also had a recent £20 million bid for promising young Lazio striker Keita Balde Diao rejected by the Italian club.

Brendan Rodgers has now turned to an unlikely source to provide cover for Daniel Sturridge up front. The Guardian has reported today that Liverpool are considering a shock move for former Barcelona, Inter Milan and Chelsea striker Samuel Eto’o.

The 33 year-old is available on a free transfer after being released by Chelsea in the summer. He spent one season at Stamford Bridge last year, joining as a back-up but soon establishing him as a first-teamer. He could well assume a similar role at Anfield.

Eto’o would bring with him bags and bags of experience and know-how. The Cameroonian has won three Champions Leagues in his career, two with Barcelona and one with Inter Milan. He also scored in two of those finals.

Eto’o scored 9 Premier League goals in 21 Premier League appearances for the Blues last year, and could be a fantastic short-term option for Liverpool. The only hurdle though, is his demand for high wages, which saw him earn a whopping £7 million in one year at Chelsea.