English Media outlets have a long history of ‘making up stories’ as they seek their ultimate motive of gaining page views. The practice however now seems to have reached a different level altogether. Decoding the transfer rumour mill hyperbole is tough these days given there are so many sources all across Europe and Latin America.

However, the one that caught my eye was several English sources claiming that Liverpool have agreed on a £4m deal to sign Mexican World Cup star Guillermo Ochoa from Spanish side Malaga. To understand what the matter is, I looked to get into the root of story: from where it emerged and who spread it.

Daily Express had first floated the story claiming that Malaga have asked Liverpool to pay £4m if they are to acquire the services of the Mexican shot stopper. It is widely known that Liverpool are in search of a goalkeeper who can provide competition to Simon Mignolet but we checked out Spanish sources if the reports turned out to be true. We however didn’t find any in the Spanish Media.

However, what startled was that Metro also published the story and had cited Spanish Media outlet Fichajes. Fichajes are a renowned site and a trusted one too but in this case they quoted Daily Express for the story. Interesting, isn’t it?

Madrid based Spanish outlet Marca however credited Mirror  for the story and have clearly mentioned that they have quoted the British Press (as shown below). The translation of the encircled portion is “According to the British Press” 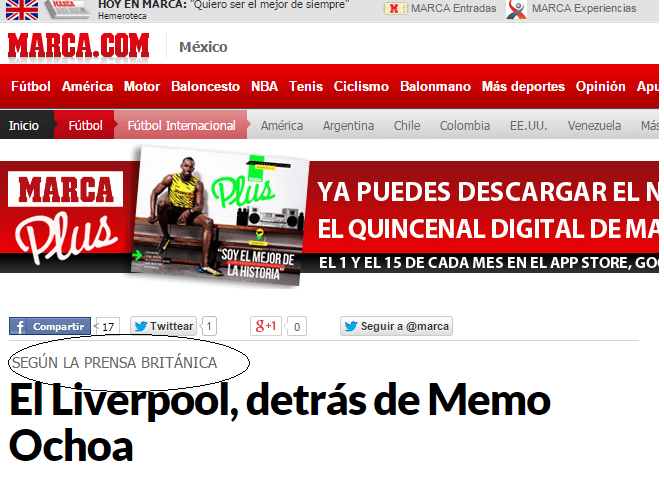 So where would have Mirror developed the rumour from? Unfortunately they didn’t even quote a source and it looks like as if they made the story themselves. Desperate journalism at its very best.

It only appears that Mundo Deportivo has a logical explanation. They claim that Ochoa who was signed as a free agent from French side Ajaccio in the summer hasn’t played a minute for Malaga. Manager Javi Garcia has gone with Carlos Kameni who has been in inspired form this season and Malaga are doing quite well in the La Liga and currently lie 7th in the table, just 6 points off from leaders Real Madrid.

However, Garcia’s decision hasn’t gone down well with Mexico coach Miguel Herrera who understandably wants his number one to play as many games as possible. Herrera is concerned that his number one will be without match fitness as his side prepare for the International games coming up. Thus there might be a chance that Ochoa could force a move elsewhere to secure a starting eleven spot, something he isn’t guaranteed at Liverpool.

Malaga had also sold Willy Caballero to Manchester City in the summer, so why do they even ask Liverpool to pay the quoted price to sign Ochoa without the Spanish outfit having found a replacement? Its sad that such rumours are spreading like wildfire but it gives a bad name to journalism.

Please note: We don’t have anything against any Media Outlets but reporting should be clean and fair which unfortunately isn’t at this current time.