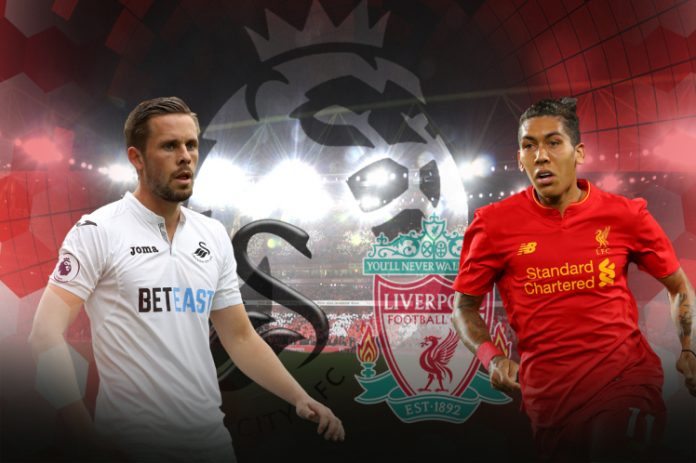 Liverpool lost their first game at Anfield this season to a seemingly rejuvenated Swansea side, which will surely go down as the shock of the season so far. Two goals from Fernando Llorente and an impressive finish from Gylfi Sigurdsson sealed the historic victory for the Welsh outfit.

It was a rather uneventful first 45 minutes, with neither side managing a single shot on target. An Adam Lallana miscued overhead kick, and a close deflected effort from Swansea’s new signing Tom Carroll were the most exciting moments during the dull first period. Extremely poor viewing for the Liverpool fans at Anfield, who were almost utterly silent when Kevin Friend blew his whistle for the interval.

The game sparked into life just 3 minutes into the second half after Fernando Llorente pounced on a loose ball inside the box and poked past Simon Mignolet in the Liverpool goal. Llorente then netted his second and doubled the Swans’ lead just 4 minutes later with a powerful header from Tom Carroll’s impressive cross. In the space of 8 minutes after half-time Liverpool found themselves 2-0 down to a team low on confidence and sitting in the relegation zone. The Anfield faithful were stunned. Swansea’s impressive following were sent into delirium.

It was somewhat back to reality just 3 minutes later for Paul Clement and his Swansea side after Roberto Firmino powered a header to the left of Fabianski from a lofted James Milner cross. A Premier League classic was suddenly in store, with the tedious first half now a long and distant memory for both sides. This goal sparked Liverpool into life for the first time in the game, with the Swans looking suddenly nervous. The Reds continued to push Swansea’s back four deeper and deeper and at this point, were the only team that looked like scoring another goal.

Just before the 70th-minute mark, Liverpool found their equaliser thanks to an astounding finish on the half-volley, again from Firmino. Anfield erupted. Joy spread across the face of Jurgen Klopp for the first time during the match. There is no doubt that he assumed his team would go on to win the match, a belief that was shared by the majority of people in the stadium, including the Swansea fans.

However, we were reminded why the Premier League is the best in the world after Swansea devastatingly hit Liverpool on the counter-attack and made it 3-2 just 4 minutes after Firmino’s equaliser. The ball rebounded into Gylfi Sigurdsson’s path inside the Liverpool area and a confident finish sent the ball past Mignolet into the bottom right corner. Swansea fans were again sent into pandemonium, with the majority of Anfield stunned into silence.

Swansea saw out the game quite confidently. Fabianski had to save a close-range effort from Divock Origi and the Swans’ defence breathed a sigh of relief after Lallana missed two good chances, putting the second over the bar with a poor header. The Liverpool substitutes Daniel Sturridge and Origi couldn’t impact the game for the Reds, and Swansea ended up getting the 3 points with an impressive 3-2 win.

Liverpool missed the chance to go above Tottenham and into second. This defeat means they have lost ground in the title race, with Chelsea 7 points above them with a game in hand against Hull City, who sit in the relegation zone. If Jurgen Klopp’s team want to be serious title challengers, they have to be winning these games comfortably. To concede 3 goals at home to a team who looked set for relegation before today is just not good enough.

On the other hand, Swansea look to be improving under Paul Clement. They looked very comfortable at points in this match, with new signings Martin Olsson and Tom Carroll helping the bring out the qualities of Llorente and Sigurdsson. If they keep that standard of performance up, there is no reason why the Swans can’t beat the drop with ease.