President of Argentina Mauricio Macari has claimed that the country’s star footballer Lionel Messi will return to play on international level to lead the national team for the 2018 World Cup finals in Russia.

Messi announced his shocking retirement from international football in the wake of Argentina’s defeat in the grand final of Copa America in June. The Barcelona striker has been involved in four finals with Argentina on international stage but has failed to win a single major trophy.

And despite having declared his intention to end his participation with Argentina, President Mauricio Macari has stated that the 29-year-old will reverse his impulsive decision in the near future.

In an interview with ESPN, President Macari said: “He’ll lead us to Russia and again be amongst the best, he’s the biggest thing that has happened to us and it’s important that we give him the sort of affection he needs to thrive.

“I congratulated him, he did everything he could but it wasn’t to be, in three straight competitions we didn’t lose a game [in 90 minutes], it’s just crazy.”

“We just didn’t get that bit of luck we needed, we have a great team with many big players to back him up and in the last three tournaments we’ve been denied in extra-time and on penalties.

Meanwhile Edgardo Bauza, who was appointed as the new head coach of Argentina’s national team last week, has also made comments over Messi’s infamous decision to retire from international football, by revealing that he expects to hold talks with the phenomenal striker to resolve his uncertain future.

“I am not going to convince anyone, my only intention is to have a chat with Messi about football,” Bauza said during his unveiling press conference.

“I have not spoken with anybody, but I will try to get in touch to see if he can meet me so that I can tell him my ideas and he can tell me his experiences.

“We will see what comes of that talk.” 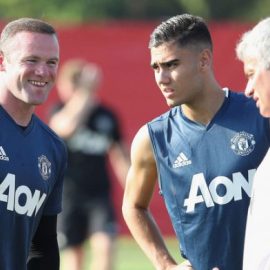