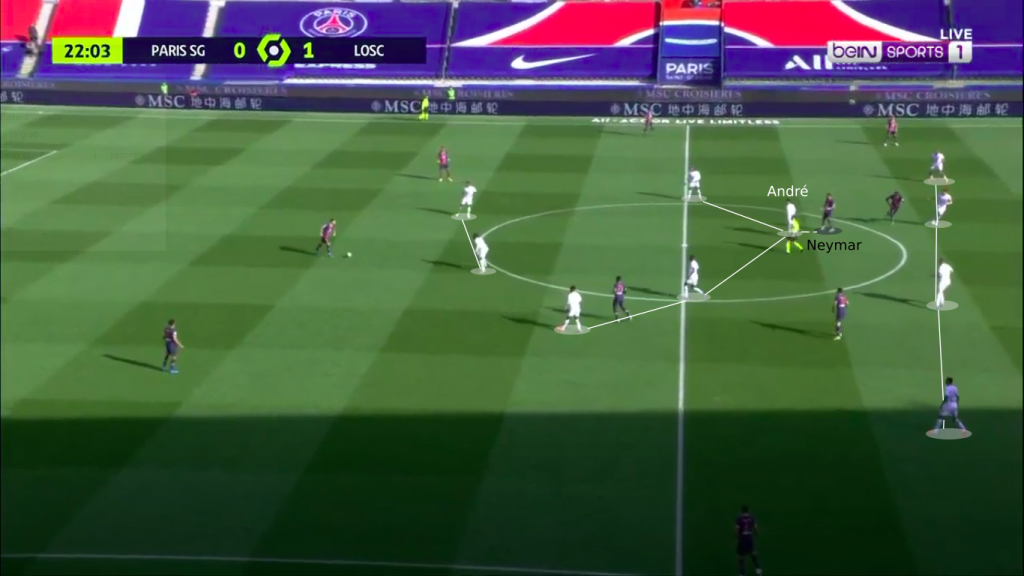 For the first time in four seasons, we have a serious title race in Ligue 1 with someone other than Paris Saint-Germain in pole position.

Monaco and Lyon are fairly close in the mix, but the side leading the way are Lille, who were facing PSG in a crunch top-of-the-table clash. With the two sides level on points going into the match, this certainly had the potential to be a title-decider.

The two sides fought hard at the Parc de Princes, and it was Lille who emerged victors thanks to the only goal of the match.

PSG looked the better side overall, but they were held by the disciplined and extremely hard-working Dogues. In this analysis, we will take a look at how they overcame the French champions.

With just 34.9% of possession and a relatively early lead, Lille found themselves defending quite a bit. Here is how they did it: 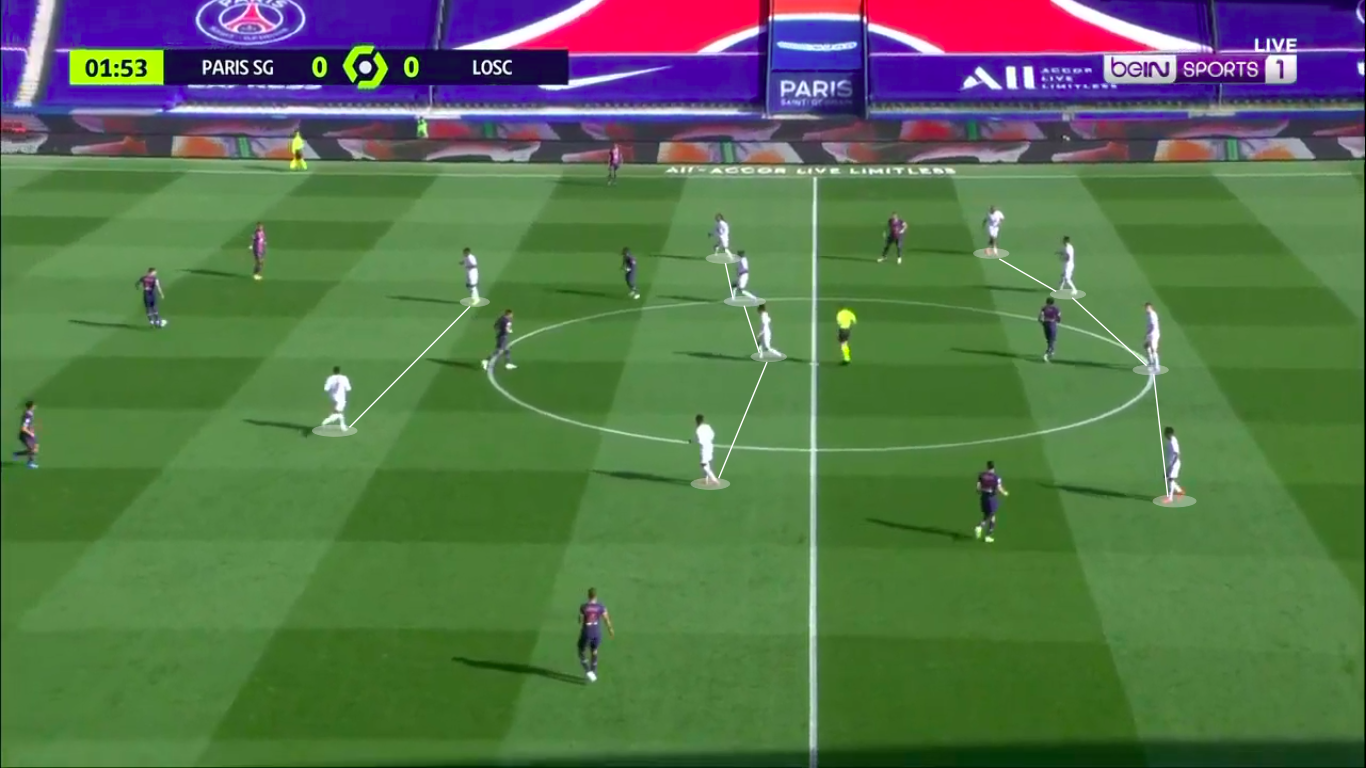 They defended just as they lined up – in a 4-4-2 which involved a relatively narrow mid-block. 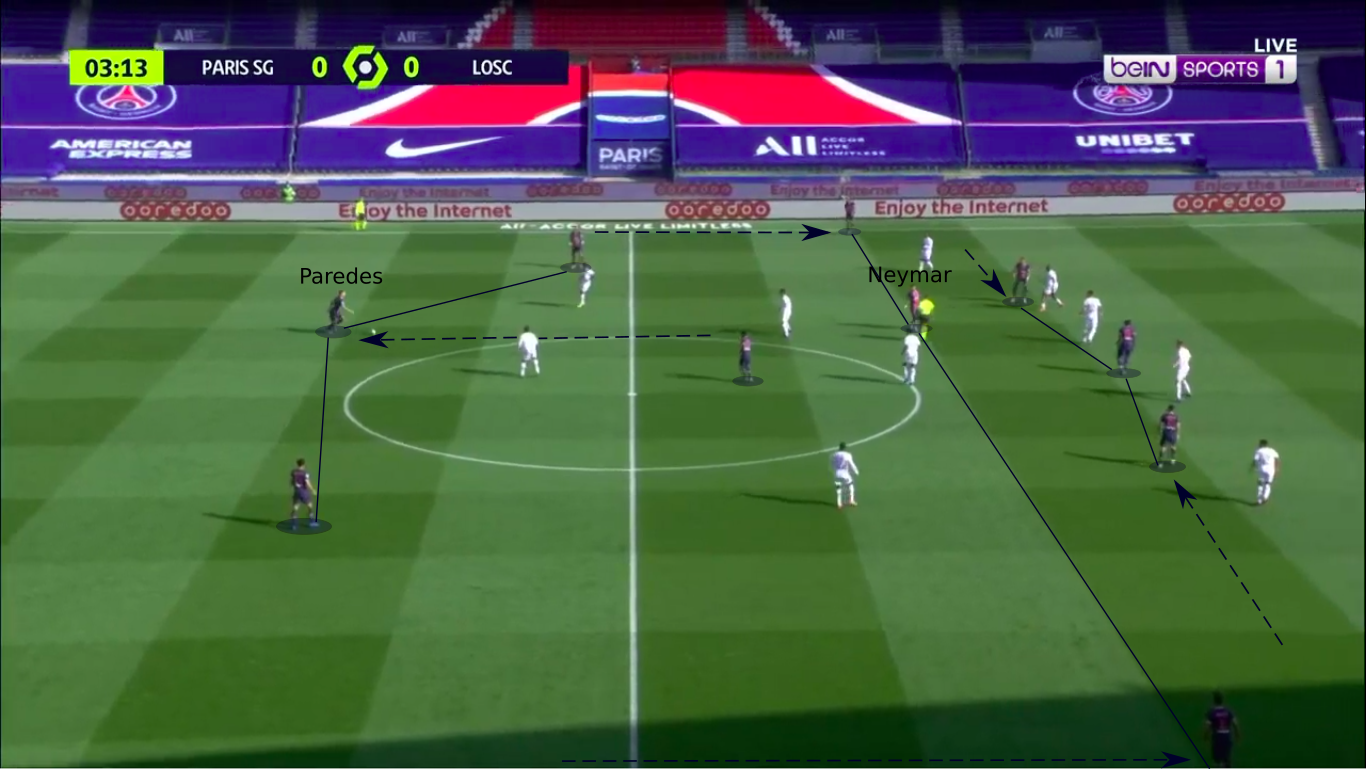 PSG’s shape in possession was quite interesting – they switched to a sort of a 3-1-3-3 as Paredes dropped in between the centre-backs, the full-backs pushed up on the wings, and Neymar dropped behind a very narrow front-line.

Neymar was, therefore, a key player in the home side’s system as he served as the link between the attack and the rest of the side.

His 77 touches were easily more than any other attacker on the pitch and fourth-most overall behind each of the PSG back-three in possession. His touch map, however, does not make for great reading. 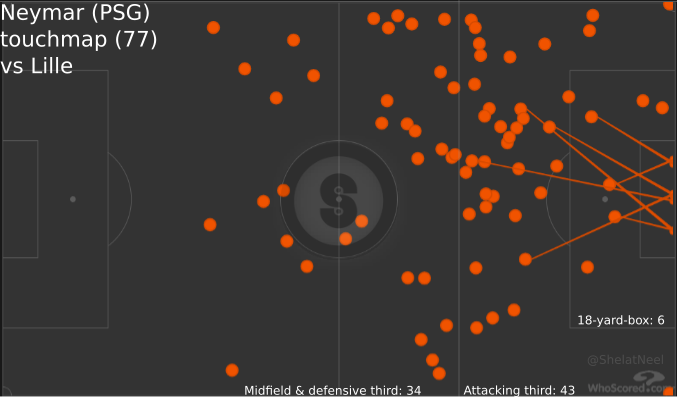 The Brazilian international managed just six touches in the Lille box, while 34 were not even in the attacking third. 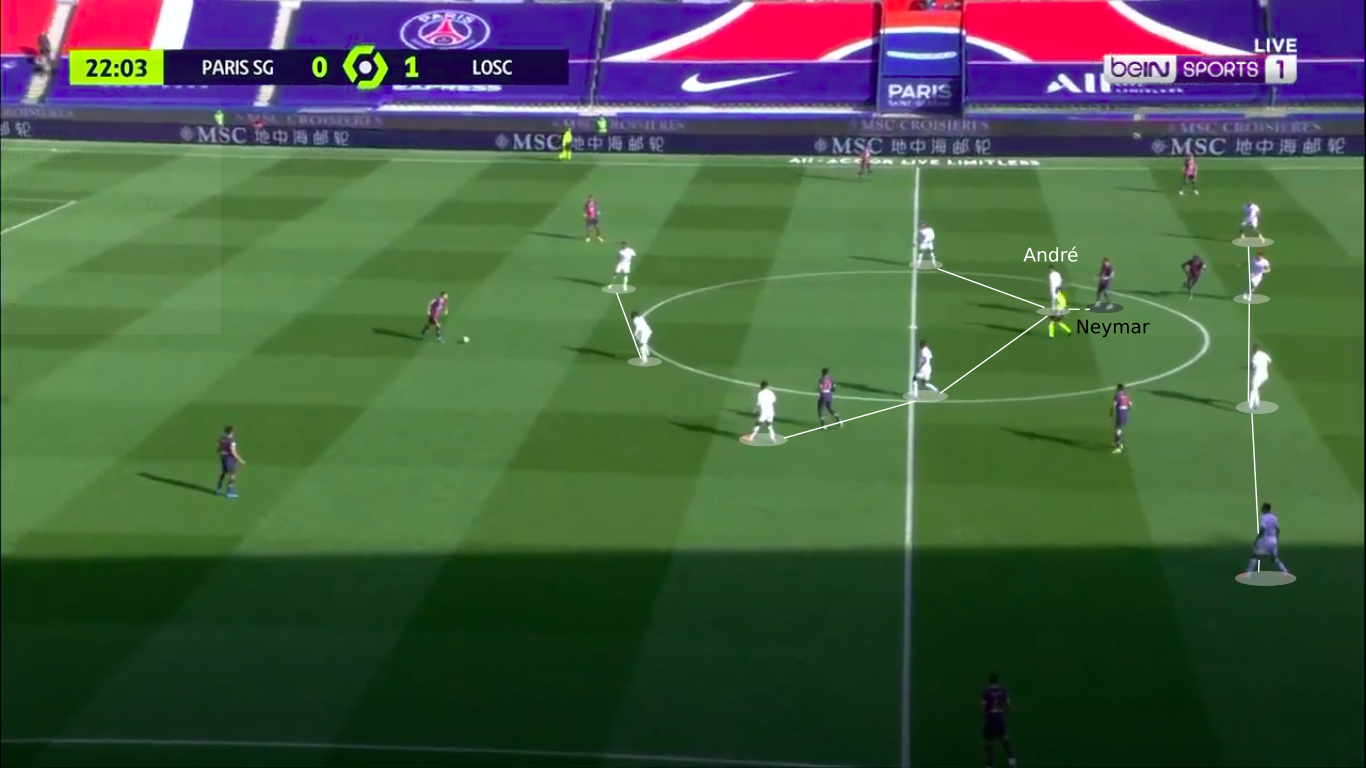 This was largely down to Benjamin André, who did an outstanding job of containing Neymar in the danger-areas. 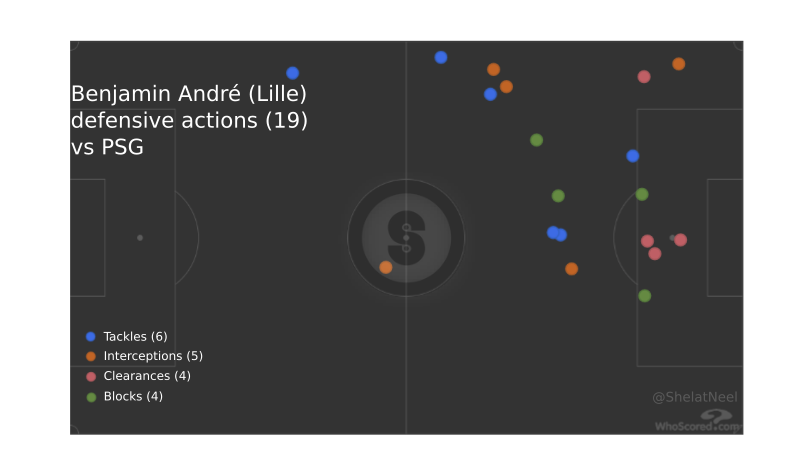 The 30-year-old French midfielder put in a man of the match display, which involved six tackles, five interceptions, four clearances and as many blocks.

For all of Lille’s defending, though, PSG had a lot of chances.

They racked up 16 shots, but as you can see from this xG map, only one shot was worth more than 0.10 xG, which Ángel Di María failed to hit the target with. Seven shots were attempted from outside the box, and this was largely due to the number of bodies Lille managed to get back in defence. 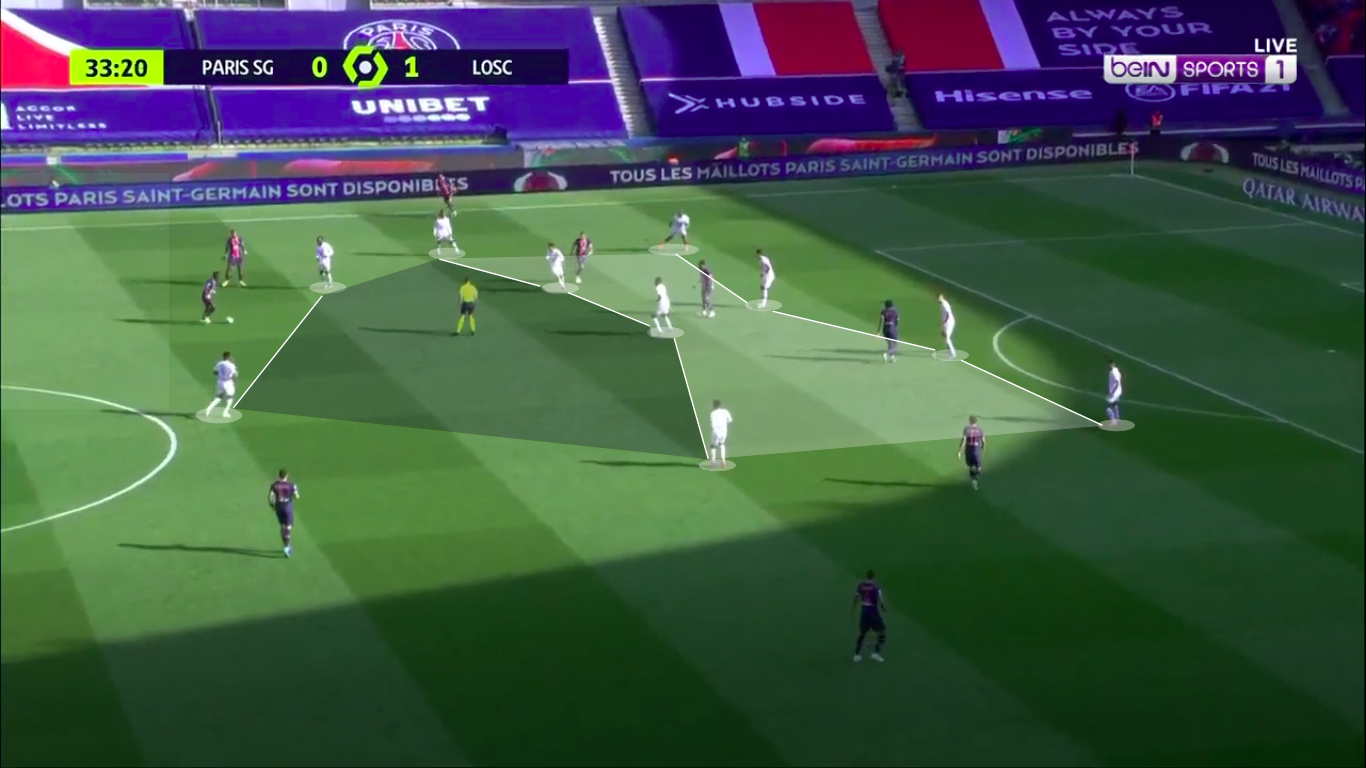 The visitors were extremely disciplined in their 4-4-2, shuffling back to their defensive third in shape when PSG got past their mid-block. There, they looked to minimise the space between their midfield and defence, which meant that PSG would be afforded space at the edge of the attacking third, but not any further.

Given the nature of Lille’s narrow and compact defensive shape, PSG’s best bet probably would have been to play the ball out wide and deliver crosses into the box.

However, their formation in possession only included two wide men (the full-backs) as the wingers tucked inside, and they did not have any real aerial presences up front as none of the front-four won a single aerial duel in this match. This is why they could only manage four accurate crosses from 30 attempts and failed to pose a threat to Lille on the wings.

Lille’s attacks did not rely on intricately constructed passing moves but were instead quite direct in nature. Their goal was a testament to just that: 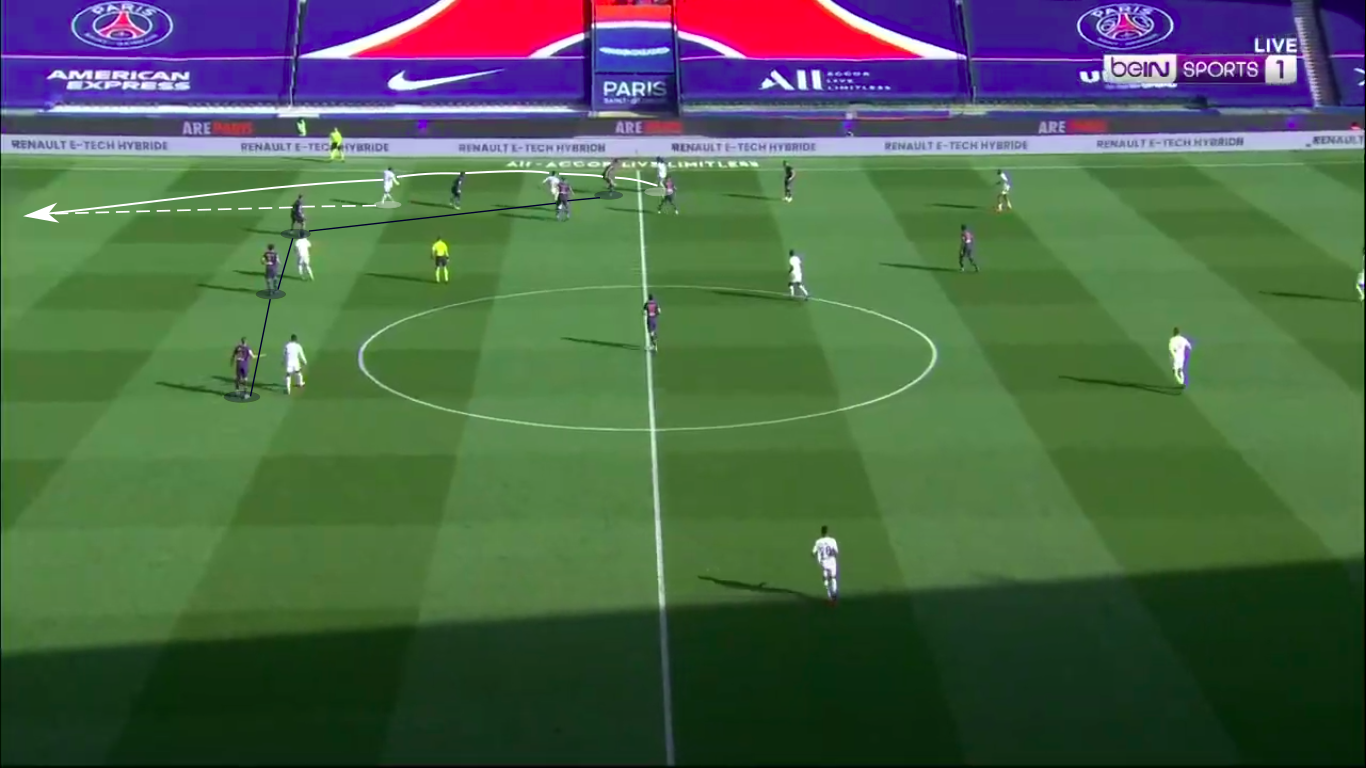 The move started with Renato Sanches playing a ball down the line with the full-back dragged forward from PSG’s already-high line. 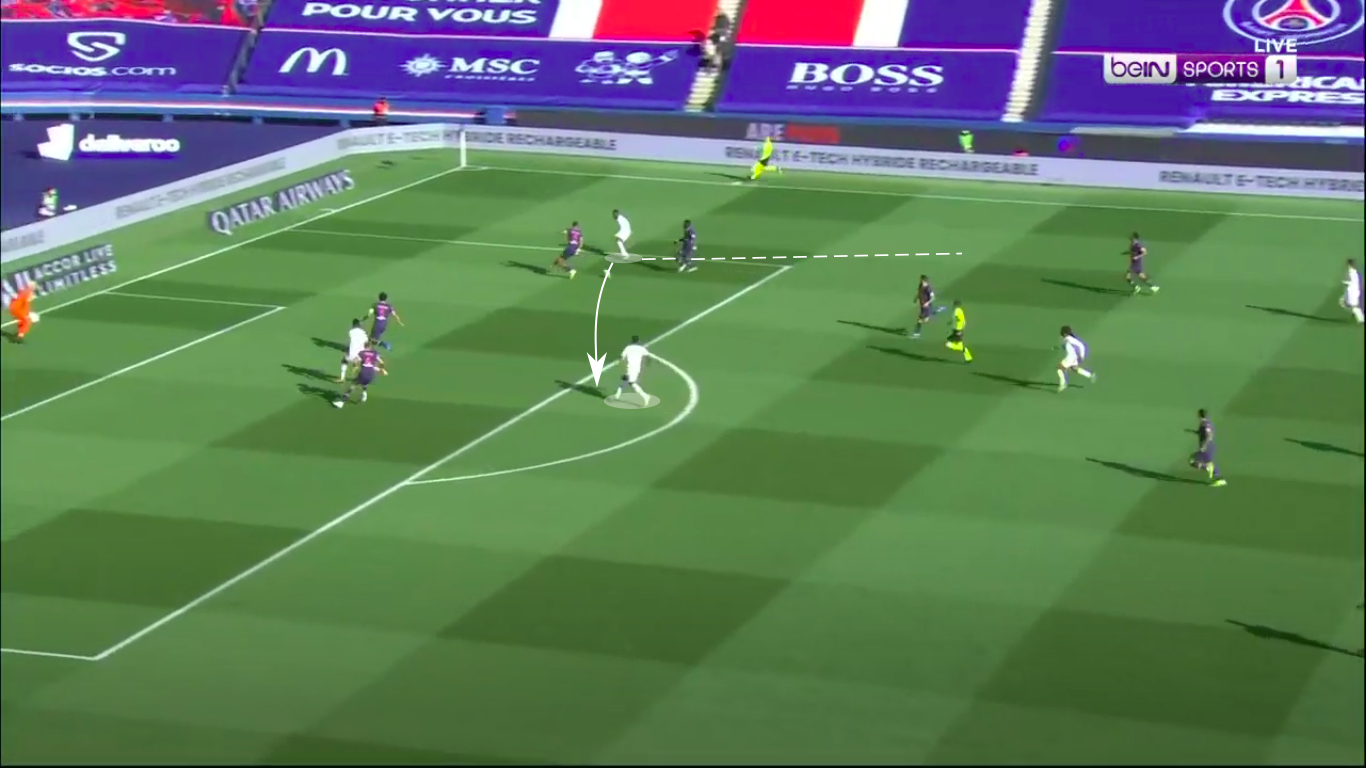 Jonathan Ikoné chased it and got on the end of it, squaring a simple ball for Jonathan David, whose deflected shot made it 1-0.

They had another couple of decent chances too, which once again originated from direct attacking to punish PSG’s high line. 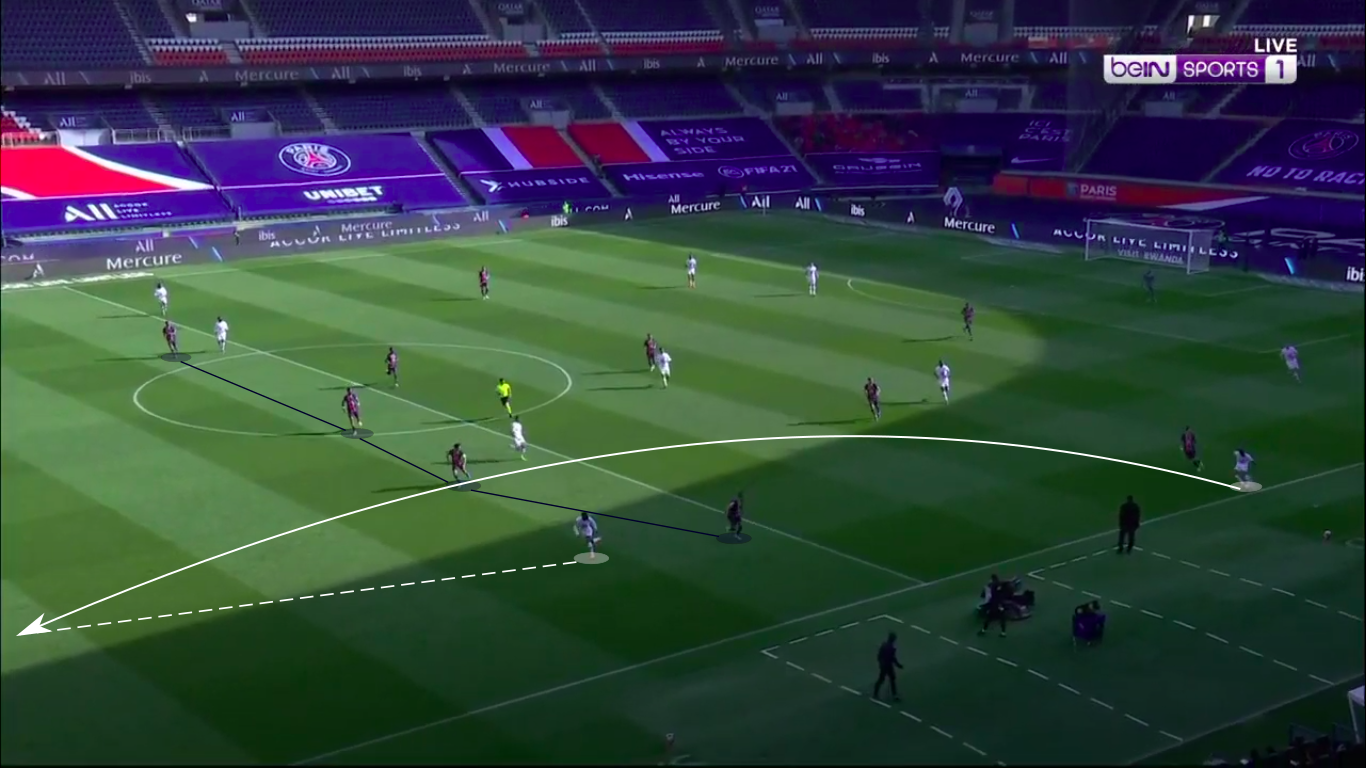 Just after Ikoné scored, Jonathan Bamba was played through on the left with a ball over the top of the defence, but he failed to beat the keeper and was marginally offside anyway.

What enabled this was the pace that Lille possessed in their frontline relative to PSG’s not-so-speedy defence. The best example of this came right at the start of the second half. 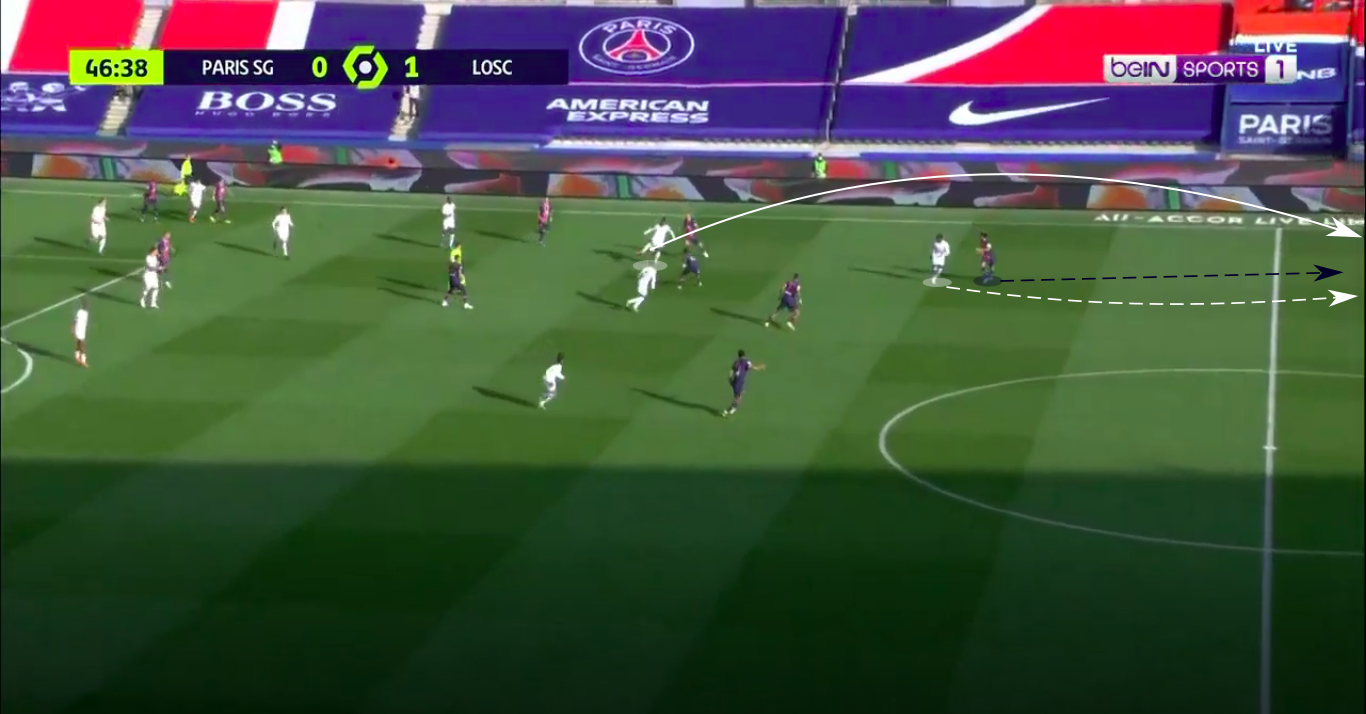 Bamba looked to play substitute Timothy Weah through on goal with a lobbed ball, but the American international was on the wrong side of Marquinhos. 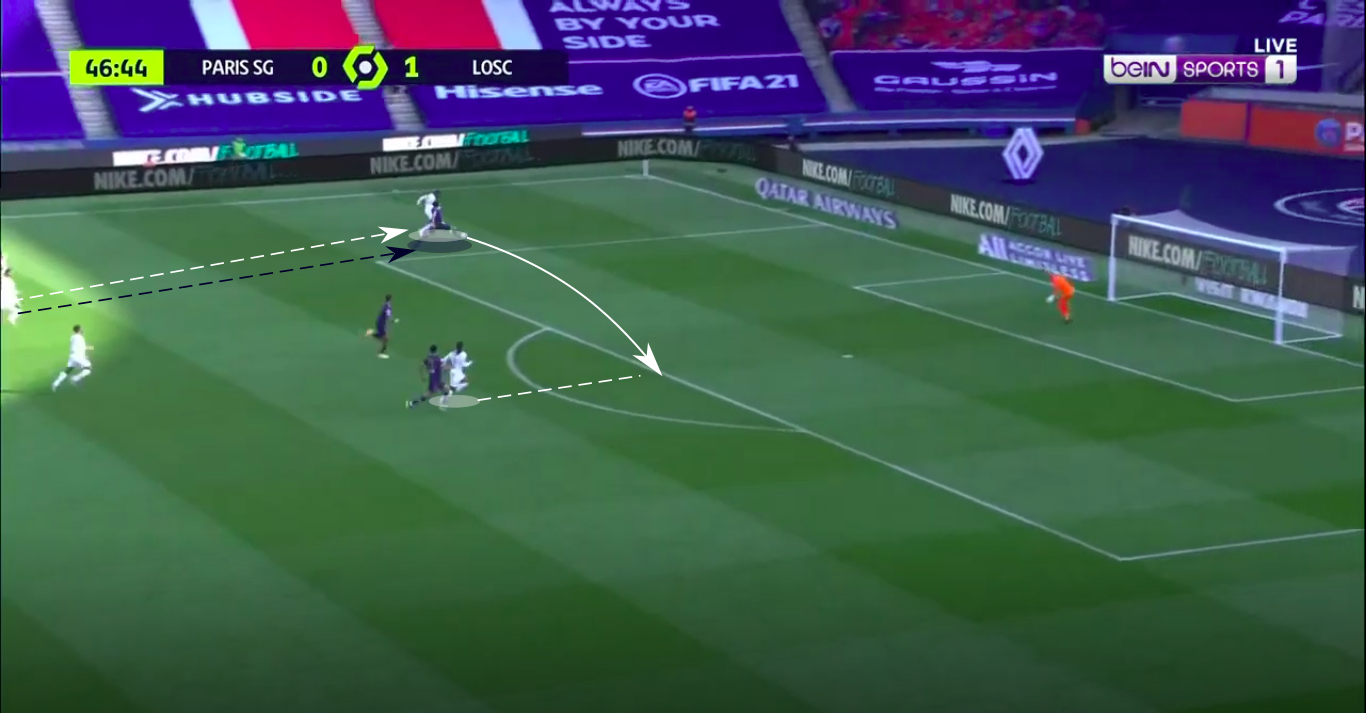 The 21-year-old forward raced past the Brazilian, though, easily getting to the ball first and delivering a low cross, which Renato Sanches failed to connect with much to PSG’s relief because otherwise, it would have surely been 2-0.

This was the perfect performance from Lille overall, as they were absolutely unbreakable defensively in their well-drilled 4-4-2, while also being efficient in attack by using the pace of their frontmen to hurt PSG on the break.

This win puts Christophe Galtier’s side three points clear at the top of Ligue 1, but they still have a fair amount of work to do as their next four matches are against opposition in the top half of the table.

As for PSG, this defeat was a fair reflection of their struggles against the top four this season – problems that even Mauricio Pochettino hasn’t been able to solve.

With the fate of the Ligue 1 title out of their complete control now, they might want to focus on the Champions League, but that too will be a tough test as they will get Bayern Munich in midweek with both Marco Verratti and Paredes set to miss that match.

For once, there are tough times in the French capital, both domestically and continentally.