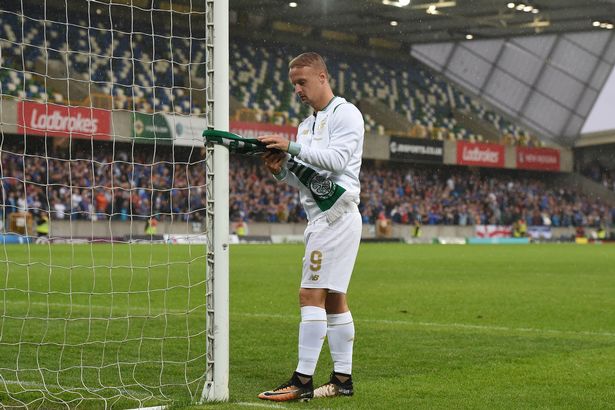 Celtic beat Rangers 2-0 at Ibrox on Saturday thanks to goals from Tom Rogic and Leigh Griffiths.

Griffiths who scored the second goal of the game was involved in a number of incidents throughout the game. The former Wolves striker was apparently trying to tie a Celtic scarf on the Ibrox goalposts. However, Rangers stewards who were guarding the woodwork prevented him from doing so.

Reacting to the incident, Celtic legend Chris Sutton said that Griffiths behaviour was childish and that he needs to ‘grow up’.

“Leigh Griffiths, the great player that he is, I’m a huge fan of his but he has to stop these silly antics,” said Sutton on BT Sport.

“Tying a scarf round a post. He got banned from Rosenborg because of his stupid antics. It’s not befitting of a Celtic player to act that way. Leigh Griffiths needs to grow up.”

Griffiths revealed after the game that his teammates egged him on to tie the scarf on the crossbar instead.

“They had to (put) two guys on the post. The boys were egging me on to tie it to the crossbar but I’m happy with a goal, three points and get back down the road to get ready for Wednesday,” he said.

Cetic remain at the top of the Scottish Premiership table following their victory, two points clear of second place Aberdeen.