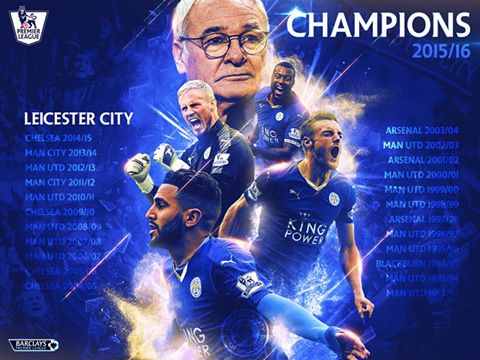 Spurs needed a win to keep their title hopes alive, and it looked like they would manage to take the title race for another weekend, when goals from Harry Kane and Son had put them 2-0 ahead at the break.

However, Chelsea fought back in the second half and restored parity through Gary Cahill and Eden Hazard. The draw meant Leicester City have sealed the Premier League title for the first time in their history.

What Leicester have done and achieved this season has been nothing short of phenomenal and the stuff of dreams. This is a team that narrowly escaped relegation last season, and a year later are crowned the champions of England. Call it a miracle, fairy tale, this is it.

Leicester City win the Premier League. Just let that sink in. Magnificent. One of the greatest sporting stories ever told.

Goosebumps all over. Unbelievable scenes. Do you believe in miracles? YES.

It’s been on the cards for a while… just let that sink in for a sec,But …WOW.. Leicester are champions… Absolutely superb. Well done

It has been a crazy Premier League season really with so many unexpected twists and turns. The biggest story, however, has been Leicester’s road to glory. The Foxes have been simply outstanding from the beginning till the very end. Not only have they played an attractive football throughout the season, but to win the Premier League with two games to spare speaks volume of their monumental achievement. This is not only a watershed moment in Leicester’s history, but it has to be greatest sporting tale ever told.