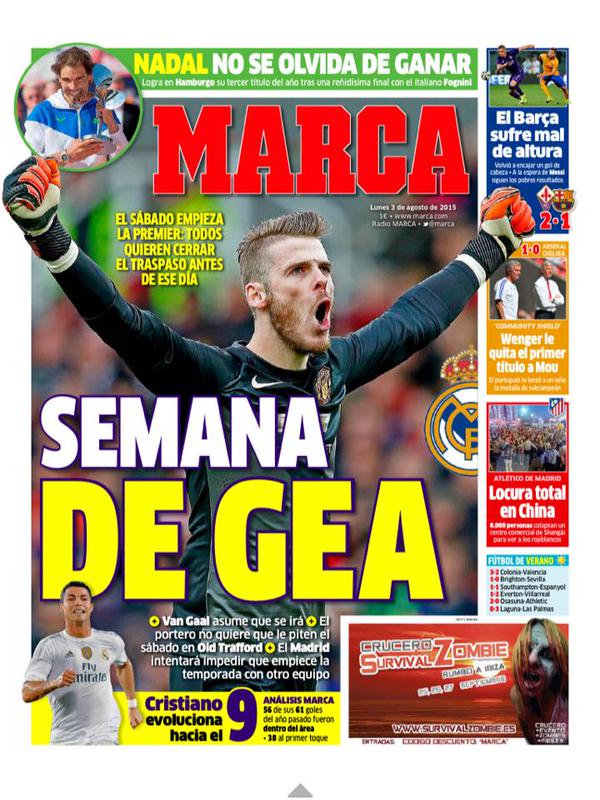 It does not need any extra introduction to say David de Gea transfer saga has been Manchester United’s biggest concern throughout the summer. Spanish newspaper Marca have an update on the transfer saga (read as boring repetition) where they claim United and Real Madrid have only six days left to finalise a deal for the Spaniard.

Neither of the clubs want De Gea to feature on Saturday for Manchester United’s season opener in the Premier League. It’s an uncomfortable situation for the player, obligated to play, despite not having his mind on the task ahead.

Real don’t see it as an ideal preparation for the player to head into the new season to be in a different frame of mind. The global audience would see him in a United shirt, and that would send out a bad message – especially if he got injured.

Louis van Gaal wants him sold. He thinks selling him now would serve the best interest of all parties involved, but Ed Woodward/the club continue to maintain their strong stance – they would only sell for €40m. Marca believe that once both clubs are back in their respective countries after long tours, negotiations will be much easier.

This week is also crucial for Sergio Ramos. A ceasefire for agreed in China but with the club back in Spain, negotiations will take place to try and reach an agreement over a new deal.

Ramos remains upset with the club for ‘leaks’ to the media which tarnished both his and his brother’s reputation, especially to the fans. Florentino Perez apparently promised Ramos a new contract after the Champions League win in Lisbon, but the offer was €7m, not the €10m they had discussed. Real don’t feel the need to rush into giving Sergio what he wants; his contract runs until 2017 and his release clause stands at €200m.

Ramos doesn’t want to sign a new deal on a much lower fee than he expected, nor does Perez want to appear bullied into agreeing to Ramos’ demands.