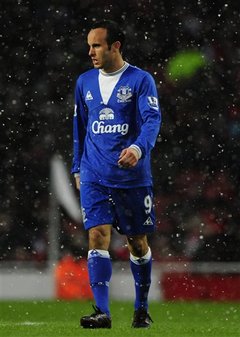 The Iranian billionaire businessman sold his stake at Arsenal in a bid to raise capital required to launch a takeover at Everton in February 2016, and he successfully purchased a 49.9% stake in the club.

He currently part owns the Merseyside outfit and is looking to make them one of the bigwigs going forward.

The Goodison Park outfit brought in Marcel Brands and Marco Silva as Director of Football and manager respectively few months ago, and the duo are starting to turn around the fortunes of Everton on and off the pitch.

It remains to be seen if the Toffees can indeed break into the top-six, but former winger Landon Donovan reckons it’s very much possible under the new ownership.

“I do keep in touch with what’s going on with Everton, very much so, I also keep in touch with a lot of the staff at Everton still. It’s a fantastic club, I was only there for three months – two different times – but it made a real impact on my life,” the 36-year-old US football legend told Soccerex USA.

“From a football perspective it was as special as it gets. To be in a place like that with the history it had and to have the ability to, I think, be a positive influence on the town, the players and the team was a real dream come true for me. The new Persian ownership group, they do have the ability now financially to get close to competing at that level.

"Everton can compete for Europe under their new owners." ?

“Before there was such a big gap between the top six clubs and everybody else. But Everton are moving into that territory where they have the ability to spend real money on players. Now the question is, can they get the right players, the right coaching, the right situations so they can get into Europe? I think the answer will be yes.”

Donovan had two loans spells at Everton – in 2010 and 2012 – totalling 17 appearances and scoring twice.

The former forward was Everton Player of the Month in January 2010 and January 2012, and was well aware of the huge gulf between the club and the big boys during those periods.

However, things are starting to change, and Everton have the potential to crack the top six and top four in the coming years.