In an interview with Sky Sports, Jurgen Klopp has confirmed that he will be unveiled as the new Liverpool manager tomorrow.

Klopp is expected to arrive in Merseyside today and will be officially announced later. The unveiling will take place at Anfield tomorrow.

Klopp is expected to sign a 3 year deal at Anfield and will earn around 7 million pounds per season. According to reports, Klopp has been given the freedom to shape up his coaching unit and will bring Dortmund duo, Buvac and Krawietz with him to Liverpool.

The German manager will travel to White Hart Lane in his first game as Liverpool manager.

Klopp tells Sky News from his home in Germany: I will be Liverpool manager tomorrow 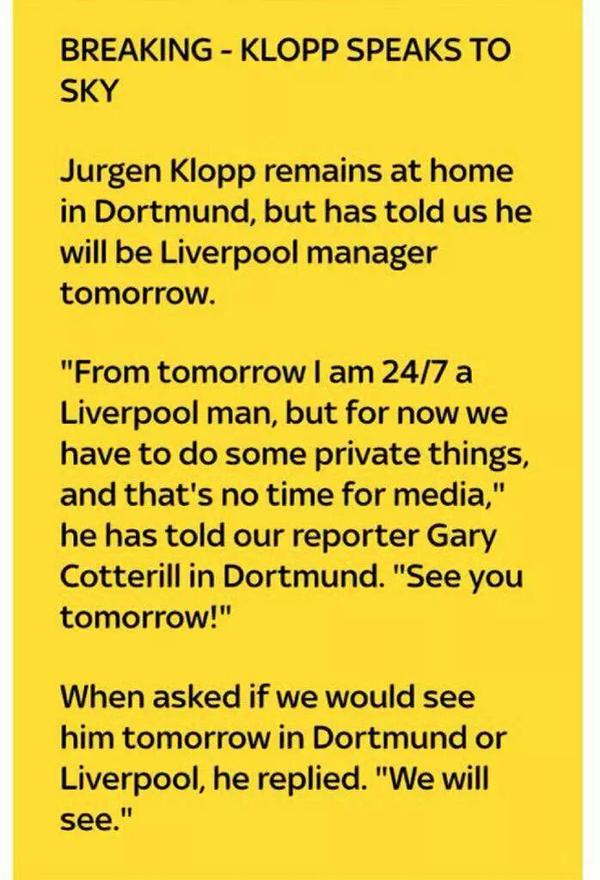 It’s a done deal. Negotiations complete. Klopp will sign his contract when he arrives in Liverpool later today. http://t.co/ufBcUmmTRh #LFC

Jurgen Klopp agrees 3-year deal to become the new Liverpool manager. The German arrives in the city this afternoon. pic.twitter.com/gQcqB0Bm4n