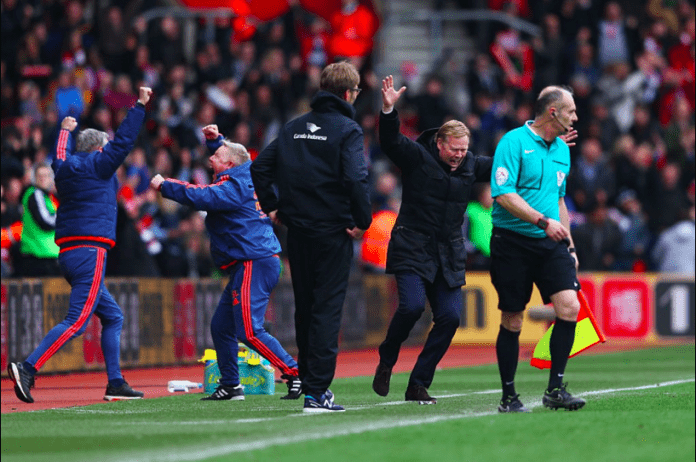 Liverpool and Southampton were involved in an absolutely scintillating match where the two teams vying for a European spot next season came head to head. Liverpool, put on display some brilliant counter-attacking, pressing football in the first half and Southampton showed the will and character to come back into the game and win it while being two goals behind. In the end, Liverpool squandered their 2 goal lead and Southampton ensured they avenged the 1-6 humiliation that occurred on the same ground a few months back. Saints took all three points from the visitors, who have lately been looking like they could make a late challenge for a top 4 spot.

Here are a few talking points from the game.

Skrtel bears brunt of that defeat, and rightly so

Martin Skrtel came into the match after a prolonged absence due to an injury he suffered back in December. In the time period, Liverpool have managed to cope without the Slovakian who has often been called a mainstay of the side. Dejan Lovren and Mamadou Sakho have managed to develop an understanding at the back and the two look like they can form a solid partnership in years to come. Jurgen Klopp decided to take the Croatian out at half time because he was booked in the first half and the German felt that the defender was not able to cope with the emotions at the stadium, which were naturally hostile towards him given the manner in which he left the club.

Martin Skrtel’s arrival signalled Liverpool’s magnificent capitulation. Liverpool had conceded as many goals in 45 minutes with Martin Skrtel in the side as they had in the previous 795 without him. It could have been four goals but for Mignolet’s good penalty save against Mane after Skrtel gave a penalty minutes into the second half.

Joel Matip will arrive in the summer and Joe Gomez will recover from his ACL injury which means Skrtel must be wary of his spot. The Slovakian has been a great servant to the club but it’s time Klopp let the 31-year-old go before his service to the club is tarnished by untoward memories.

Jurgen Klopp must take some blame for the defeat

It has become unceremonious to blame Klopp for his mistakes at Merseyside which comes in contrasting fashion as Brendan Rodgers received most of the blame even if his players did him no favours. However, against Southampton, manager Jurgen Klopp must take some blame for the defeat as well.

Even though Lovren was a risk with his yellow card, and the Croatian was playing like he could be at the receiving end of another card, why did Klopp bring on Skrtel — a player who hasn’t played a game since his injury in December — in the second half of the game ahead of Kolo Toure, someone who has done very well in a squad role recently? Emre Can could also have moved in defence. No doubt, Klopp couldn’t have envisioned Liverpool will surrender in such fashion but still counts for bad management.

Liverpool’s attacking threat went after Christian Benteke was introduced in the second half. Daniel Sturridge wasn’t too threatening in the second half but perhaps it made more sense to bring on someone like Sheyi Ojo (who came on significantly later for Allen) or replace the striker with Henderson and give more strength to the midfield. Klopp’s substitutions let the team down as much as the players themselves did. Tactically, the German didn’t have the best game.

Jon Flanagan captained the Liverpool side with Jordan Henderson and James Milner on the sidelines. Sentimentally for Liverpudlians, it would be ‘reassuring’ watching a homegrown talent lead out the side. After Gerrard, this must be a sight for sore eyes. Jurgen Klopp has used many captains in different games and we can choose to not make a big deal about the captaincy rewarded to the 23-year-old but this game illustrated why Flanagan the defender, strongly divides opinion.

Flanagan’s positioning is not the best and it showed. He was not able to deal with Southampton’s attack in the second half. The Scouser didn’t add much in attack as a full-back should. To make matters worse, he was not even solid defensively on the right flank. He made an error for a goal and had an extremely poor second half.

While the “Scouse Cafu” does have his merits on the field, is a homegrown player which is important and the manager clearly likes him, he doesn’t look like a regular first-team starter. Liverpool must look at adding another full-back in the summer as Joe Gomez, Alberto Moreno, Brad Smith and Jon Flanagan will be crucial covers for the full-back positions and have plenty to prove to be regular starters.