Liverpool need to sign a top quality striker in the summer. The Reds already have a deal in place for Danny Ings, but the club still need to add more depth in their attacking line up. In 2013-14, Liverpool finished second in the league, where they scored over 100 goals in that season. However, the Reds just managed over fifty goals last season, which shows where the main priority lies for Brendan Rodgers while bolstering the squad. 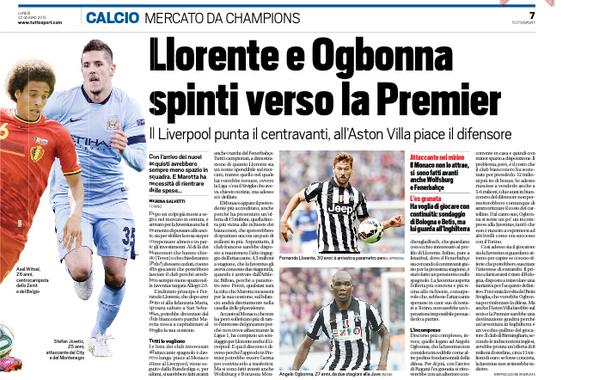 Daniel Sturridge struggled with injuries last season while none of other three strikers made any significant impression. A total of only eight goals had been scored by four Liverpool strikers all season.

Liverpool are actively trying to sell Mario Balotelli (if the reports are to be believed) while Fabio Borini’s agent has recently confirmed that the Italian wants to move elsewhere to get regular games under his belt.

According to Tuttosport, Liverpool are showing a keen interest in Juventus striker Fernando Llorente.

The 30-year-old striker joined the Serie A champions in 2013 from Athletic Bilbao. He was a cult hero at Bilbao where he scored over 115 goals for the Basque club. For Juventus, he has scored 23 league goals in 65 matches. Last season he played 31 league games for the Turin giants, scoring seven times.

With Carlos Tevez likely to return to Argentina, it remains to be seen, whether Juventus would be willing to sell Llorente as well. The Bianconeri are demanding a fee in the region of €15m for the Spain striker and so far there hasn’t been any shortage of admirers.

French club Monaco are reportedly interested in him and are ready to meet Juventus’s asking price. The player, however, is not too keen to join Ligue 1 at the moment, rather he prefers a move to the Premier League and more specifically Liverpool.

Is Llorente the right type of player Liverpool should be looking at? Let us know your thoughts below.