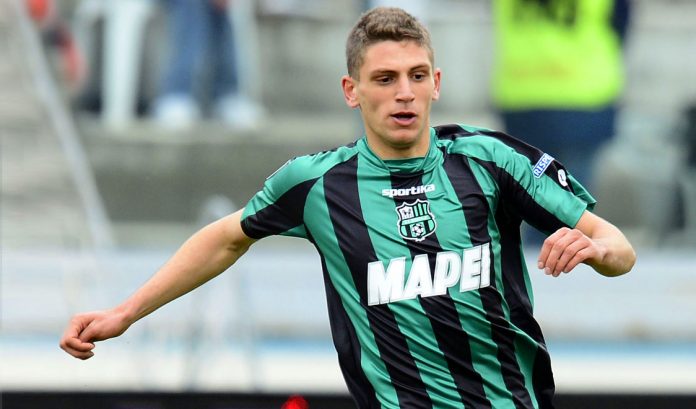 Chelsea are looking to strengthen their squad during the January transfer window and the Premier League champions were eyeing up a move for Italian forward Domenico Berardi.

The Sassuolo forward is still only 21 and has already established himself as one of the most exciting attacking talents in world football.

Manchester United, Chelsea and Liverpool were interested in the versatile forward but the Italian media are reporting that Berardi has already reached an agreement with Juventus.

Berardi is a left footed forward operating from the right flank or as a central striker. The Sassuolo attacker is famous for his creativity, goalscoring and high defensive contributions.

The player’s agent has claimed that his client will not leave Sassuolo in the middle of the season but has agreed to join Juventus.

The Italian will sign for the Serie A champions in the summer and a deal is already in place.

“Juventus have a verbal agreement with Sassuolo over a June move, but we’re not thinking about it at the moment, there’s a lot of time between now and the summer.

“I can categorically exclude any departure in the coming transfer window. He won’t move till June, according to a plan he’s already agreed with the club.

“Berardi is thinking of one thing: to keep on improving at Sassuolo”, his agent said.

Chelsea are crying out for a goal scorer from wide positions and Berardi would have been a perfect fit. Furthermore, he could have been a much needed alternative to Eden Hazard and Willian.

Berardi could have been an effective alternative for the misfiring Diego Costa as well.